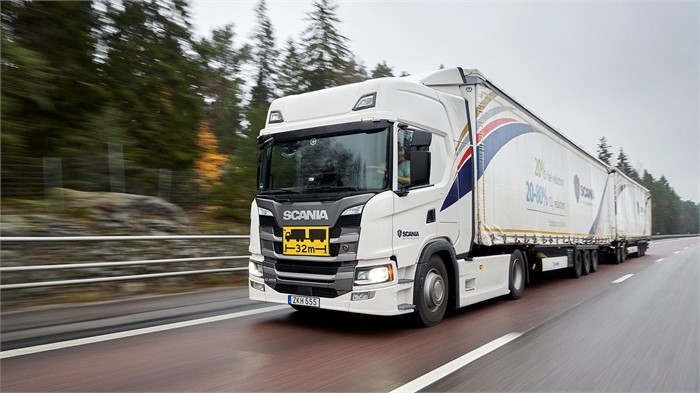 Scania uses its in-house hauling unit, Scania Transportlaboratorium, as a research and development tool for alternative fuels and other initiatives. Scania’s Transport Lab runs 14 trucks and trailers to and from its manufacturing facilities in Södertälje, Sweden, and Zwolle in the Netherlands every day. Each trucks puts on about 400,000 kilometres per year, which Scania says “corresponds to three times a normal operational deployment.” Over the past 10 years, Scania has been able to reduce the fuel consumption of these vehicles down to 23.9 litres per 100 kilometres by using speed limiting and adding boat-tails to trailers, for example.

Aside from its 14 long distance tractors, the Transport Laboratory has 31 other vehicles used for local and regional work in and around Södertälje as well as for transporting employees between Södertälje and Stockholm with the help of five coaches. Scania was able to lower the overall carbon footprint of its vehicles from 65 grams per ton-kilometre down to 9.4 grams per ton-kilometre as of October 2018 through better fuel efficiency and the use of gas, ethanol, and hybrid fuel sources.

The Scania Transport Laboratory has also started transitioning away from fossil fuels and toward hydrotreated vegetable oil (HVO). Of the 1.6 million litres of fuel the group uses every year, over 90% of it is HVO. “On the trips to and from Zwolle, we’re running close to empty tanks, but our drivers are trained to economise on fuel as much as possible on the 1,500-kilometre journey,” says Jan Björkund, managing director of Scania Transportlaboratorium.

You’ll find a large selection of used Scania trucks for sale on this site, including hundreds of used trucks within Scania’s popular P Series and R Series groups.