DAF Discovers A1600 That Has Been In Operation Since 1968 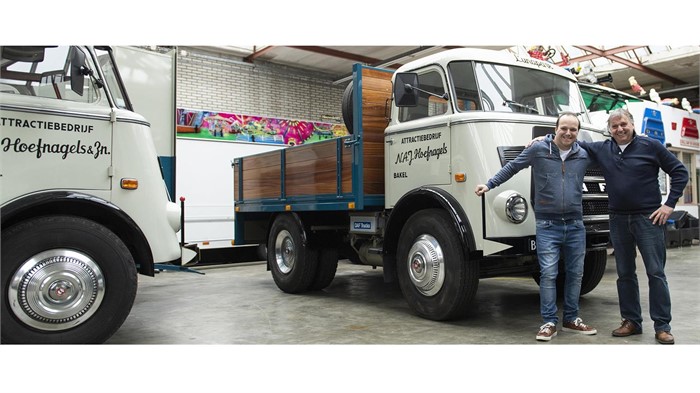 This DAF A1600 has been in operation since 1968, and Frits and Nicky Hoefnagels still use it to haul attractions to the fairgrounds. (Photo courtesy of DAF.)

Back in August, DAF announced that it was looking for the oldest DAF truck still in operation as a way to celebrate its 90th anniversary, a campaign that launched alongside a video depicting a DAF truck that has been operating since the 1980s in Ireland. A few months and nearly half a million views later, the company has found what it was looking for in the form of an A1600 model that is still running strong after 50 years. The truck, owned by father and son Frits and Nicky Hoefnagels, is used for the unique purpose of hauling “a nostalgia-filled fairground attraction all over the Netherlands,” according to DAF.

After disqualifying several entries for not meeting the criterion of still being “in regular use for commercial transport on public roads,” DAF came across a photo submitted by the Hoefnagels, who had not one but four older DAF models in excellent condition. “In addition to a 2800 from 1975 and a 1600 from 1971, we have two A1600s. One of our DAF ‘kikkers’—so called due to their ‘frog-like’ appearance—is from 1968, and the other from 1969. And we don't take it easy on them,” says Frits Hoefnagels. “We are delighted to own and drive the oldest DAF still in commercial use, an A1600 from 1968.”

If you’d like to find out more about the oldest DAF truck in operation, the company created a brief documentary that highlights how the classic truck is used to give fairground visitors a blast from the past. And if you want to buy a DAF gem of your own, you’ll find hundreds of used DAF trucks for sale on this site.