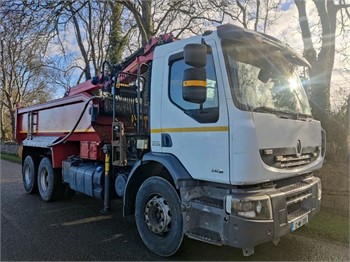 New Volvo FH540 completed with an F820RA.2.26 piped for a future fly jib. The demountable body was completely customised to suit the customer requirements, along with the front cover designed to ma...See More Details

Cranes have proven valuable construction equipment going back thousands of years to their use in ancient Egypt. Tractors with cranes offer the heavy-lifting abilities of a modern articulating or telescopic crane from such manufacturers as Fassi to load and unload up to several tonnes of steel, bricks, piping, and other materials, combined with the ability of a flatbed, dropside, or other truck from such manufacturers as DAF, HINO, IVECO, MAN, Mercedes-Benz, Renault, Scania, and Volvo, to easily transport the mounted crane and goods to various locations. New and used tractors with cranes provide operators major time, cost, and labor savings.

Also referred to as crane trucks or truck cranes, tractors with cranes essentially enable one operator to both drive the truck and load/unload the goods being hauled via the crane so as to not need a forklift or additional people. Tractors with cranes are often modified to include outriggers that provide support when loading/unloading materials, while the crane may be compatible with hooks, buckets, and other attachments and rotate 360 degrees or more. Historically, the first mobile crane is said to have been mounted on a steam traction engine dubbed “Little Tom” by Aveling & Porter in the 1870s.