The CF series of lorries are good all-rounders, and while better trucks are available for specialisms from other manufacturers, the 75 in particular is pretty good at everything. As with any DAF it's all about the engine.

First DAF rolls off Line
The first version of DAF is launched, and begins production shortly afterwards. There’s significant heritage behind these trucks.
CF Series Revealed
https://media.sandhills.com/img.axd?id=4038689615&wid=0&rwl=False&p=&ext=.jpg&w=0&h=0&t=&lp=&c=True&wt=False&sz=Max&rt=0&checksum=0FnMh2MxWY0e1%2fXnXr1vglXSoADcoz5a
The CF series is launched, 70 years after DAF’s founding. These trucks are destined to become the definitive all-rounders, and the 75 is the most flexible in the series.
Launch
The CF series gets an overhaul. Essentially the same trucks but with some minor tweaks.
Second generation launched
https://media.sandhills.com/img.axd?id=4038689555&wid=0&rwl=False&p=&ext=.jpg&w=0&h=0&t=&lp=&c=True&wt=False&sz=Max&rt=0&checksum=9PxOiPgYOfDqiSHWT0fOTeoTv1zXMcCQ
Second generation launched with Euro 4 and 5 available at the same time.
https://media.sandhills.com/img.axd?id=4038689967&wid=0&rwl=False&p=&ext=.jpg&w=0&h=0&t=&lp=&c=True&wt=False&sz=Max&rt=0&checksum=2Sbb30TFoDF7o%2f96vXkM1%2brMuZduRhZv
The newest 75s are launched. A bigger update than the 2000 edition, featuring improved interiors, better drivelines and a whole host of safety extras (but not as standard, so check carefully when looking to buy a used truck). EEV Emissions standard is available for the first time
Euro 6 CF75 Launched
https://media.sandhills.com/img.axd?id=4038690119&wid=0&rwl=False&p=&ext=.jpg&w=0&h=0&t=&lp=&c=True&wt=False&sz=Max&rt=0&checksum=VN4GofV%2bg1bB4k0gL1iFQc0u2CUGQK1D
The new DAF CF range is revealed at the CV Show in Birmingham

The CF series of lorries are good all-rounders, and while better trucks are available for specialisms from other manufacturers, the 75 in particular is pretty good at everything. As with any DAF it's all about the engine. 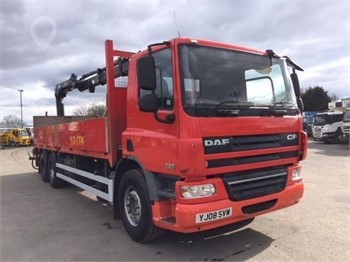 Like all trucks in DAF's CF range, the 75 is notable for successfully balancing fuel efficiency with performance. Essentially, the 75 is the 65, but bigger - but that's not necessarily a bad thing. The 65 is fairly spacious, pretty versatile, and very economical - the 75 is all of the above, but a bit more.

The 9.2 litre PACCAR PR engine is one of the highlights of the CF75, delivering a maximum of 360hp. The technology behind DAF from PACCAR makes their trucks perfect for longer distances; not just because of spacious cabs with lots of equipment; but also because some versions of the 75 can last 100,000 miles between services. Some cars can't even do that in their lifetimes.

The CF series of lorries are good all-rounders, and while better trucks are available for specialisms from other manufacturers, the 75 in particular is pretty good at everything.

As with any DAF it's all about the engine. The 75 boasts a 9.2 litre PR engine, manufactured by DAF's parent company PACCAR, which has all the power behind it that you might expect. What you wouldn't have guessed, though, is just how economical the PACCAR engines can be.

Cheap to maintain, with freely available parts and a great network of dealers, some variants of the CF75 will manage 100,000 between services (which aren't too costly compared to some manufacturers), and the rest will do 75,000.

The big difference between the 75, and the smaller 65, is customisability. The 65 essentially comes with one chassis, and a number of wheel based variants - with the 75 however, the world's your oyster. If you're buying one new there'll be almost any type of axle configuration available, from two-axle tractors and rigids, all the way up to four-axle double driven lorries.

Make sure you ask when arranging a viewing of a used truck, as there's so many different configurations about it's worth making sure the one you're looking at is the one you need.

The CF75 In a Nutshell

The 75, like the 65, is a good all-rounder; economical and powerful; but with added customisability, and that little bit extra room, leaning towards longer haulage operations.