Available as a chassis cab. 2005 DAF CF85.340 8X4 hookloader for sale. Boughton equipment. Sheeting system. Automatic gearbox. 32 tonnes gross vehicle weight. Fitted with reversing camera One owner from new. Has been maintained to a high standard. Delivery can be arranged within the UK or to any ...

Choice of 6 in stock. Can be sold as a front cut and rear cut. Loading service available. 2005 DAF CF85.340 8X4 chassis cab truck for sale. Automatic gearbox. 32 tonnes gross vehicle weight. Fitted with reversing camera One owner from new. Has been maintained to a high standard. Delivery can be a...

The CF85 is popular as a tract unit and as a tipper - especially amongst owner-drivers. The MX 12. 9 litre engine is the thing to note when it comes to the CF85...

The CF85 is popular as a tract unit and as a tipper - especially amongst owner-drivers. The MX 12. 9 litre engine is the thing to note when it comes to the CF85... 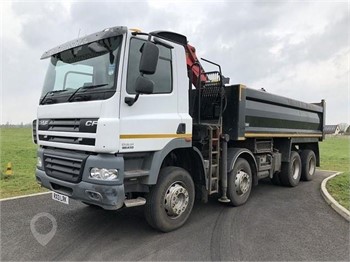 DAF CF85 as a Tipper

If the CF75 is just the CF65 but bigger, the 85 is a completely different animal. Equipped with a monster 12.9 litre engine, the DAF CF85 is a much bigger truck than the others in the CF series, but with the added flexibility that is missing from the super-heavyweights like the XF105.

The 85 is suitable for a range of operations, but leans towards longer haulage, equipped as it is not only with a very powerful engine, but a spacious cab too. The latest models feature climate control for even more comfort. The entire CF series is made for heavy duty use, but none more so than the 85. A perfect all-round vehicle then, with an emphasis on intensive haulage.

The MX 12.9 litre engine is the thing to note when it comes to the CF85. DAF are famed for their engines, which are now produced by PACCAR - DAF's parent company. Extremely hardwearing, as well as powerful and economical, the MX in particular is as close to “best in class” as you can get when it comes to the solid all-rounders as opposed to the more specialist vehicles. 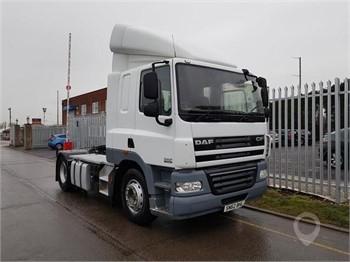 There are 4 power outputs available under the 85's hood: 360hp, 408hp, 462hp and, at the top of the range, 510hp. This customisation is extended to the axles too, with both single and double driven formats in two, three or four axle configurations available. There's even the option for reduced engine capacities, which can deliver even more power and torque, but reduce the amount of fuel consumed, making the 85 an extremely economical truck indeed.

In fact, the 85 (along with its smaller siblings) incorporates new DAF SCR technology to ensure it complies with Euro 4 and 5 emissions levels.

The CF85 In a Nutshell

One of the most economical long haulage trucks on the market. Great for drivers going up and down the UK on a regular basis.

Blog Archive
DAF 2011 Changes to PACCAR MX engine
DAF Trucks introduced a significant number of changes to the 12.9 litre PACCAR MX engine back in 2011. ...
Read More
Belgrade Sanitation Company Takes Delivery Of 44 DAF CF & LF Refuse Trucks
The trucks include rear-, side-, and top-loading refuse trucks as well as tank trucks and street sweepers that double as snow ploughs in the winter months. ...
Read More
DAF Trucks Receives Royal Visit
DAF President Harry Wolters briefed the King before His Majesty visited with employees at the truck factory to discuss adjustments made to production and how they have affected the workers’ daily activities. ...
Read More
DAF Trucks Launches 25 Year Market Leader Dealer Demo Programme
These “Pure Excellence” XF FTG 6x2 tractors are available with 480 and 530 horsepower engines, and each bears the custom “liquid metal silver” livery. ...
Read More
DAF Introduces New AEBS-3 Advanced Emergency Braking System For CF, LF & XF Trucks
With an increased forward range and a dramatically increased near-range angle of view, the new system provides earlier warnings, making it easier for drivers to avoid collisions. ...
Read More
CRS Building Supplies Cashes In DAF Driver Training Vouchers To Familiarise Drivers With New CF 370 Trucks
Purchased in March, the four rigid crane trucks have been very well received indeed; the firm have already established a build spec to simplify future orders from dealer Kingdon Wessex DAF. ...
Read More
DAF CF & LF Electric: A Closer Look
Thanks to their zero-emission, low-noise operation, these trucks are well-suited to urban distribution and other tasks, even in heavily regulated areas such as London’s Ultra Low Emission Zone. ...
Read More
Wirral-Based Recovery North West Adds Six New DAF Trucks, Including Four XFs and Two LFs
The firm says buying DAF rather than replacing like-for-like was “a simple decision” due to DAF’s cost, performance, and “well-known reliability.” ...
Read More
DAF Holds Virtual Truck Show On Social Media With 700 Entrants & 55,000 Viewers
The show was originally planned as a live event but was moved to social media due to the COVID-19 pandemic. ...
Read More
Waste-To-Product Recycling Specialist Renewi Adds 200 New DAF CF Trucks To Its 2,400-Vehicle Fleet
This follows a Renewi order for 250 DAF vehicles just 18 months ago; the newest CFs will be based at the company’s branches in Belgium and the Netherlands, with some also operating in the larger Benelux region. ...
Read More