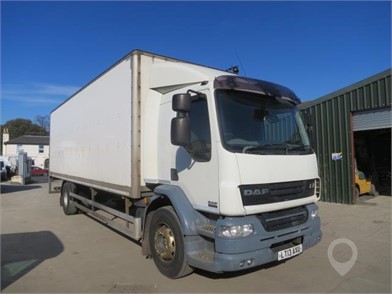 It's worth noting that the cabs for the LF45 and the LF55 are the same. Both can be specified with a sleeper cab - which makes a good use of space - but neither is really big enough for regular long distance haulage.

Launch of 55 Series
https://media.sandhills.com/img.axd?id=4038689579&wid=0&rwl=False&p=&ext=.jpg&w=0&h=0&t=&lp=&c=True&wt=False&sz=Max&rt=0&checksum=9PxOiPgYOfA0M3HdrRZn67fBnm%2fYK0a1
The LF55's predecessor, the 55 Series is launched, operating in the 11 to 15 tonnes category
NEW LF Series Announced
https://media.sandhills.com/img.axd?id=4038689939&wid=0&rwl=False&p=&ext=.jpg&w=0&h=0&t=&lp=&c=True&wt=False&sz=Max&rt=0&checksum=2Sbb30TFoDFNV90nBJa2Q%2bwrKVvVqbeD
In 2001 DAF announces the LF series, aimed at the distribution market. The first LFs start to appear.
LF Wins Truck of the Year
The LF is voted ‘International Truck of the Year 2002’ a year after its release. The 45 still sells better than the 55, and gets more praise, but the 55 definitely has its uses and is worthy of the accolade.
LF55 Goes Euro 4 and 5
All DAF models are upgraded to the new Euro 4 or Euro 5 emissions standard
LF55 Available as EEV
With all of DAF's trucks at the time, an owner could buy an Euro 5 plus or 'Enhanced Environmentally friendly Vehicles' version of the LF55 as an optional extra.
NEW LF Facelift Announced
The LF gets an overhaul. The Edition 2009 series becomes available, with a nicer interior; added (optional) safety features; and some driving improvements. If you see a jump in price for models released in 2009 and beyond…this is why.
EEV as Standard for 4.5 litre
All 4.5 litre LFs were rated as EEV as standard
DAF Starts making Hybrid LF
https://media.sandhills.com/img.axd?id=4038690153&wid=0&rwl=False&p=&ext=.jpg&w=0&h=0&t=&lp=&c=True&wt=False&sz=Max&rt=0&checksum=VN4GofV%2bg1aIzf6MdxRoHdhwruEaE9oJ
DAF begins producing hybrid trucks, and starts with the LF series. Some of the 12 tonnes LFs achieve up to 20% CO2 emissions – great for a distribution truck – and great for DAF, who are among the first European manufacturers to sell hybrids.
Last LF55 rolls off the production line
https://media.sandhills.com/img.axd?id=4038687115&wid=0&rwl=False&p=&ext=.jpg&w=0&h=0&t=&lp=&c=True&wt=False&sz=Max&rt=0&checksum=gFp2VBWni5R41SBw5SV%2bnyAWqsn8cLgI
The LF55 is replaced by the Euro 6 LF range

It's worth noting that the cabs for the LF45 and the LF55 are the same. Both can be specified with a sleeper cab - which makes a good use of space - but neither is really big enough for regular long distance haulage. 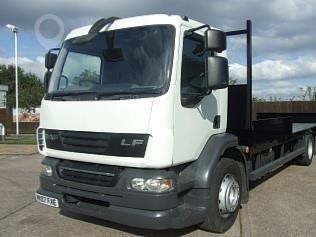 The LF55 is a local distribution truck, which, although slightly larger than its sibling the LF45 (as the name implies), is able to take on a much wider variety of tasks. Like the 45 it's suitable for distribution up to 21 tonnes as standard; however, it can be plated to a train weight of 32 tonnes.

Though the 45 is named as such for its 4.5 litre engine, the 55 doesn't follow suit - it's driven forward by an excellent 6.7 litre GR series engine, produced by DAF's owners PACCAR. As with any DAF truck the engine is a standout feature, and the larger capacities on the newer versions mean up to 20% more torque and power, without actually increasing fuel consumption. For a specialist truck that's economical, you could do worse than the LF55.

The LF 55 has now been superceded by the new Euro 6 range. Out goes the LF45 and 55, the range is now simply called the DAF LF and distinguished by the power outputs as model codes.

It's worth noting that the cabs for the 45 and the 55 are the same. Both can be specified with a sleeper cab - which makes a good use of space - but neither is really big enough for regular long distance haulage.

That's not to say that the 55 is without its advantages; the main one being that it can be configured for municipal use.

There are often trucks for sale on TruckLocator.co.uk that feature vacuum tanks, gulley suckers and refuse bodies - the 55 is ideal for these kinds of applications, and this is the best place to look.

LF55 In a Nutshell

The 55 is actually the same size cab as the 45, but features a bigger engine; it's still best for local work, but can be customised for more specialist applications. Many of the used DAF 55s for sale on TruckLocator.co.uk will feature modifications in some capacity.

First hitting the UK's roads in 2014, the Euro 6 LF, as with the CF and XF no longer uses extra numbers to determine the size.  This means that the models will simply become an LF, instead of an LF55 or LF45 at present.

This is sensible, as the LF defines the cab used, (for the LF, the Renault-built version) as opposed to an engine size or weight range.  It will be a while before we see them for sale on trucklocator.co.uk in used form.