Launch
The new Kerax range of trucks was launched by Renault.
Upgrade
In time for 2007, the entire range was given an upgrade.
Second generation launched
The second generation of Kerax trucks was launched, made to be compliant with Euro 5 emission standards. All the engines were made to be more powerful.
Production ceased
Renault ends production of the Kerax. It is replaced by the Renault C and K trucks.

Going strong since 1997, the Renault Kerax range of trucks has become a firm favourite with many drivers throughout Europe. The Kerax was initially made purely for construction work, with many trucks in the range being used as cement mixers, tankers and tippers. However, as the Kerax was modified, its versatility improved too.

Today, the Kerax is still known for being made for construction jobs, but some of the newer models are used for things as diverse as support trucks for major races and military purposes. They're either available in rigid truck or tractor form, with the latter tending to be the more popular. The most recent models, first made in 2009, have three power ratings, the highest being 460 bhp.

Each vehicle has a choice of gearbox; either a 16-speed manual gearbox or an automated 12-speed gearbox. Last year, Renault pulled the plug on the Kerax, although many newer models remain available for sale, most of which being compliant with recent emission standards.

The Kerax has its flaws, although newer versions have fewer problems than the earlier ones, helped considerably by the new engine. Compared to some of their main rivals, the Kerax doesn't look too good, but is solid enough in most departments. 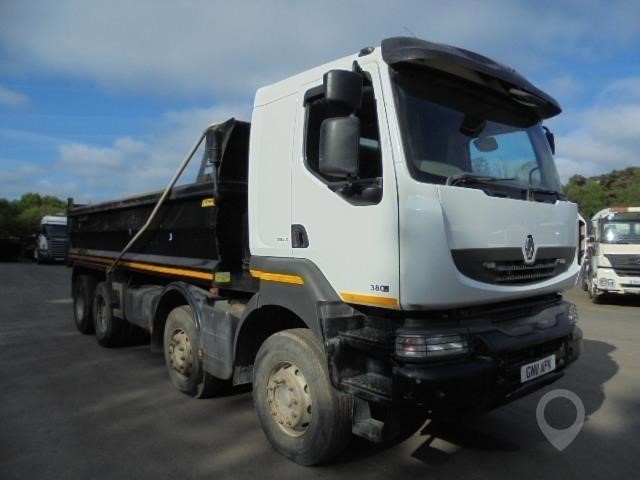 The Renault Kerax has always been built to perform in the toughest operating conditions. It has a maximum payload of 30 tonnes on the heavy-duty version and is an extremely capable workhorse in this sector. Trucks from the 2008 vintage have double reduction tandems and improved drive axles, which greatly improved on- and off-road performance over earlier models. The Renault Kerax came with the usual three cab options of Day, Sleeper or Global and was offered with both automatic and manual transmission options. The versatility continued with a choice of tractors or rigid bodies and a range of 4x2, 4x4, 6x4, 6x6 and 8x4 axle set-ups. The Renault Kerax is undoubtedly a tough cookie and is best suited to work in demolition, construction, heavy haulage and quarrying.

If you squint a little, the Renault Kerax could almost be mistaken for its more cultured sibling, the Premium. A closer inspection, however, reveals the tell-tale elements of a ruggedised machine. The bumpers are heavy duty and the light clusters are protected by metal grilles. Ground clearance is also increased to 385mm, giving the Renault Kerax the best ground clearance in its class.

That raised stance means that it is a long way up to climb inside the cab, although there are some anti-slip steps to help you. The interior is familiar to drivers of Renault Magnums and Renault Premiums, with the same curved wraparound dash. Hard plastics abound, reflecting the tough life expected of the Renault Kerax. The instrument layout is good and the switchgear is laid out pretty much where you would expect it to be. The driver's seat has air suspension and is easily adjustable, as is the steering wheel. With excellent lumbar support, finding a comfortable driving position is easy. Visibility is good, with lots of glass and thin front pillars. Additional windows can be put in at the rear sides, enhancing the field of vision by around 30 degrees. This can be especially useful on busy and tight site roads. The bunk in the Sleeper cab is spacious and comfortable and easily good enough for a few nights away, when you will also appreciate the storage room, cup holders and various cubby holes.

The Renault Kerax from these years has the DXi11 power plant, rated at 380, 430 or 460hp. It makes use of SCR technology to give Euro 5 compliance. There is good torque across the engine range and excellent performance, even when pushed hard under load. Those engines are married to either the 4 to 16 speed ZF manual Ecosplit gearbox or the OptiDriver+ automatic transmission. The latter sometimes needing a bit of coaxing to find the right cog. Up to 26 tonnes, the Renault Kerax suspension is parabolic, with a semi-elliptical set-up used for the 32 tonnes-plus ones. These are tuned for the roughest of working environments, so the ride quality is not the smoothest you will ever encounter. Clearly, that air-suspension seat is not just for show. Steering is sharp and precise, however, and the electronic braking system and drum brakes configuration works well, adjusting retardation for each individual wheel according to the conditions encountered.

The Renault Kerax is a robust truck with some excellent features. The build quality is not the best in this segment, but lower prices can make a used Renault Kerax a particularly good buy.