Renault Truck's outgoing light to medium weight truck covers the range from 7.5 tonnes GVW up to 18 tonnes, where it crosses over with the Renault Premium. At just 210cm, the Renault Midlum boasts one of the most compact cabs at this weight range - certainly from a European manufacturer.  This is the cab that Renault shares with the DAF LF45 - in fact Renault make it for DAF.

Although the Midlum has been around since 2000, the relatively recently introduced range of Euro 5 engines range has increased power at the lower end from 160hp to190hp, whilst the top power remained at 220 hp for the 5-litre, 4-cylinder DXi5. The 7-litre 6 cylinder Renault DXi7 engine range now starts at 270hp (up from 240hp previously) rising to 300 hp (previously 280hp).

All engines reach Euro 5 thanks to SCR technology using Adblue injection. For a lightweight distribution truck, there is an automated ‘Optitronic' gearbox as an option, but it is not offered as a standard item.

Truck operators can choose from the Day cab or the Global cab, which is 40cm deeper than the day cab. The Renault Midlum Global cab can be found in five different layouts - Standard; Global Utility (municipal applications); Global Office, (some office features); Global Relax (a rest cab) and Global Night - a fixed sleeper cab.

One innovative development from Renault Trucks is the nifty dashboard-mounted gear selector - Midlum drivers can change gears on the choice of manual or automated gearbox easily - again useful for urban operation.

Replacement for the Midlum - The Range D

Renault has just waved goodbye to the Midlum and replaced it with the Range D, which apparently stands for distribution. The Midlum was available in something like 75 different models, from tippers and fire engines to car transporters, but its core market was undoubtedly that of regional and local distribution. The Midlum arrived in 2000 and was available in gross vehicle weights from 7.5 tonnes to 18 tonnes, where it handed over to the Renault Premium. The Midlum had an extremely compact cab for the sector, at only 210cm, which made it even more manoeuvrable on tight urban delivery runs. Being a hugely versatile truck, however, the Midlum was also available with a four-door crew cab.

More recent models enjoyed a power upgrade as the Midlum moved to Euro 5 engines, using the Adblue additive. The entry-level engine saw an increase in horsepower to 190hp from the previous 160hp models. Those Midlums with the larger six-cylinder DXi7 seven-litre power plant were bumped up on power to either 270hp or 300hp, up from 240hp and 280hp respectively. The light distribution Midlum trucks came with the option of an Optitronic automatic gearbox, but a manual box was fitted as standard. A dash-mounted switch allowed drivers of the automatic to switch into manual mode at the touch of a button — a useful feature on demanding urban operations.

Aside from the compact standard day cab and crew cab, the Renault Midlum also offered a choice of Global cabs. These were 40cm deeper than the standard day cab and also came in no fewer than five different formats. There was the Global Standard, Global Utility, Global Office, Global Relax and Global Night. The Utility was aimed at municipal work, while the Office had some useful office features and the Relax was a rest cab. The Night was a standard sleeper cab. The Renault Midlum also came with a high-roof cab with extra headroom, which is a useful option in a cab that has a high engine tunnel intruding into the cab.

Renault built its 100,000th Midlum in 2010, so the truck was a popular success for the French company. One key to that success was undoubtedly its flexibility. It was available in an astonishing array of cabs, engines and axle and body layouts, making it adept in all sorts of markets. Renault also kept it simple, however, and the pricing was keen. These are now factors that make the Renault Midlum a popular second-hand choice. 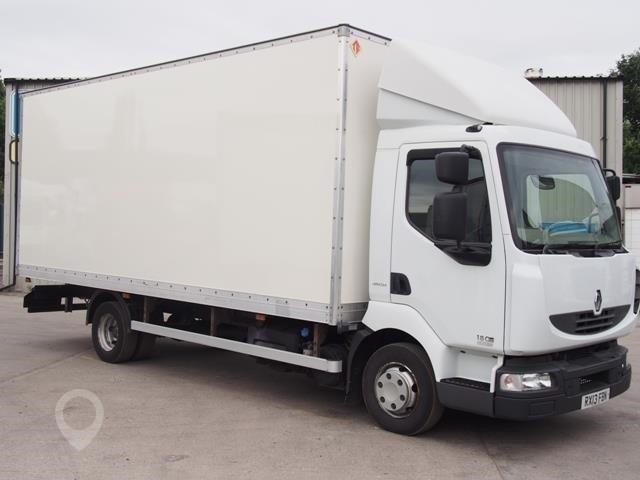 Over the last few years, the decreasing number of car-licensed drivers able to drive a 7.5-tonne truck has brought the future of these trucks into question. Many operators have taken advantage of the change to move up to the larger 12-tonne rigid market, attracted by the extra payload and flexibility available. This is also seen as a good training ground for larger trucks. The 18-tonne 4x2 rigid, though, stands unmoved by trends or legislative changes and that stability is one of the reasons that the four wheeler remains a popular choice for operators working in the distribution market, either in town or on inter-urban routes.

The Renault Midlum 18-tonne 4x2 rigid is offered with a 240hp Euro 4 DXi7 engine in straight-six format. It is a 7.2 litre unit with four valves per cylinder and a single overhead cam. This is a superb unit, with maximum 240hp power coming at 2,300rpm and 920Nm of torque arriving between 1,200 and 1,700rpm. Married to a six-speed manual ZF gearbox, the combination is free-revving and punchy, yet still fairly quiet due to those rear-mounted timing gears. Manual trucks are becoming ever rarer but the driver will get used to the ZF six-speed synchromesh, with its pleasingly stubby little cable-operated gearstick and servoshift on tap to help out with the changes. Cog selections are accurate and easy to accomplish, while the clutch has the right amount of travel and a biting point that makes it easy to gauge the changes.

The Renault Midlum 18-tonne 4x2 rigid chassis is a beefy-looking set-up with a total length of 11.123 metres. Suspension comes via steel parabolic springs all round, aided and abetted by telescopic shockers and anti-roll bars. It is a simple but capable set-up which gives predictable handling responses. The steering is well weighted and responsive too, with just the right amount of power assistance. This adds to the feeling of predictability and control, but do watch out for the large turning circle, which can cause a vehicle of this length to require two lanes for tight turns.

Braking is via a full air system which is electronically controlled and boosted by ABS and EBS systems. There is also a torque drag system to limit torque when changing down. The secondary braking system is provided by an exhaust brake that develops up to 130kW on the DXi7 unit.

Two simple non-slip steps will get you inside the medium-height cab, where the driver will find a large glasshouse with great visibility to front and sides. Excellent rear-view mirrors provide good visibility to the back also. There is an angled dash housing logically arranged groups of switches and the standard layout of gauges and display panels. There is quite a substantial engine tunnel, but it shouldn't prevent you getting to the sizeable single bunk. The driver's seat is fully adjustable and offers a comfortable working position.

As a package then, the Renault Midlum 18-tonne 4x2 rigid looks to be a dependable vehicle and solid all-round performer, providing a decent second-hand choice.