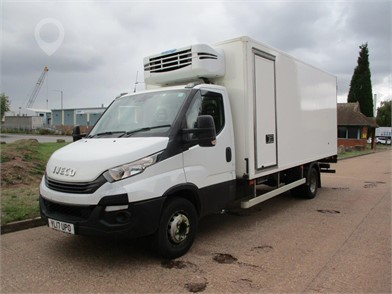 Refrigerated vans are one of numerous types of vans for sale on Truck Locator along with box vans, combi vans, flatbed vans, Luton vans, panel vans, and other varieties. Refrigerated vans, also sometimes referred to as “reefer vans,” are distinguished from other van types by their use of built-in refrigeration units. These units make it possible to store and transport cargo that needs to be kept frozen or chilled to a specific temperature until it reaches its designation. Caterers, butchers, fishmongers, grocery stores, florists, medical supply companies, and others use refrigerated vans to transport perishable foods, wine and other alcohol, chemicals, flowers, pharmaceuticals, plasma, and much more. 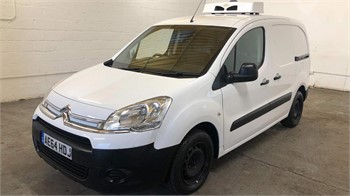 The beginning of mobile refrigeration dates to the 1800s when railroads started using railcars containing boxes of ice to keep meats and other perishable goods fresh during transport. By the mid-19th century, insulated boxcars were introduced, and by the 1870s, an ice-based ventilation cooling system was invented. The earliest mobile vehicles used cooler wagons, large chunks of ice, and later dry ice to keep cargo chilled. In the early 1940s, the first vehicles with portable mechanical cooling units began appearing in large numbers; the ice cream industry was an early beneficiary of the technology. Today, refrigerated vans are capable of deep-freeze to chilled operation, and place a stronger focus on enhancing fuel efficiency and reducing CO2 emissions.

Modern refrigerated vans are, of course, often equipped with fuel-saving aerodynamic roof-mounted cooling systems. Other common components include thermal door linings, heat-reflective windows, and various types of insulation built into the walls, roof, and floors. Other common components include in-cab adjustable climate-control systems, digital display monitors, and dual or multiple compartments with individual temperature control. Some vans also equip electric standby power units, which allow the operator to plug into an electric outlet and keep on cooling the refrigerator unit while the vehicle is turned off.

Reefer vans are also generally available with a wide range of customisations, including fold-away shelves, meat hooks and rails, waterproof floors, corrosion-resistant and slip-resistant materials, and entryways that allow owners to load cargo by the pallet load.

You’ll find a selection of new and used refrigerated vans for sale on Truck Locator, including models from such brands as Ford, Mercedes-Benz, Volkswagen, and others.