Iveco have at last launched the Euro 6 version of their Eurocargo range. With no date for availability at the time of going to press, it shouldn't take too long, as the truck is largely the same as the outgoing model with the exception of two new engines. 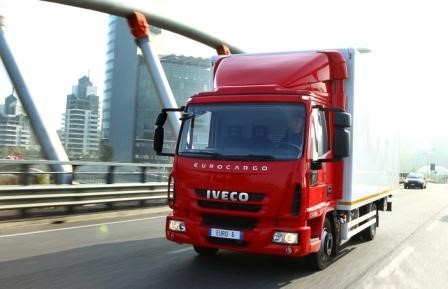 Good job it says Euro 6 on the number plate

After 22 years, nearly 500,000 units sold and in second place in the UK market, Iveco have chosen to take the evolution route, rather than revolution for their middleweight offering. The company's SCR-only approach that was adopted in the Stralis has been carried over to the Eurocargo. This means that Iveco were able to keep the cab architecture the same since the motor needed no additional cooling, which usually effects cab and chassis design. Looking at the launch images, it is difficult to detect any changes to the cab at all.

For operators (and Iveco dealers) this could be a good thing. Fewer changes mean smaller investment in R&D and therefore hopefully a sharper pencil at the time of sale.

Why choose SCR-Only at Euro 6?

With the exception of one engine from Scania, Iveco are on their own on the SCR-only route to Euro 6. This means that the company could genuinely steal a march on the competition, or have created a large white elephant. Only when the pricing of the trucks is revealed and they subsequently hit the street in numbers will we know if not using and SCR/EGR combination is a winning move.

Relying solely on SCR means with no EGR there is no need to have an active DPF system. This is where an extra heat source is applied to the filter to burn off deposits. This is an extra system to go wrong and, of course will use additional fuel. As EGR systems create high levels of Particulate Matter, which accumulates, in the particulate filter, an EGR truck will typically need some form of active DPF regeneration. The cleaner-running SCR-only system should only need a DPF filter clean every 300,000kms and should be well suited for urban operation.

A truck that is missing a DPF system will have fewer parts and weigh less, since there is no additional cooling required. In theory this should improve payloads and make the truck cheaper and easier to maintain.

Iveco are using the Hi-SCR system across the whole range of new engines - 5 litre and 7 litre Tector engines.

According to Iveco, the engines have been 'rightsized'. The existing 4-litre Tector 4 is being replaced by the 4.5-litre Tector 5, whilst the 6-litre Tector 6 has been upgraded to a 6-cylinder, 6.7-litre Tector 7. These new engines have bags more power and torque, albeit with a small weight penalty compared to the previous models of around 3-4%. The concept behind the increase in swept volume is to work the engines less hard, therefore improving durability and reliability.

The 4-cylinder Tector 5 will have revised power ratings of 160 and 190hp plus a new output of 210hp. This new output means that the 4-cylinder could do the work of a 6-cylinder with a weight saving of 120kg.

Iveco have gone overboard with the choice of gearboxes, 6 manual ones with a choice of 5, 6 and 9 speeds, 4 automated ones of 6 and a new ZF Eurotronic 12 speed and three fully automatic Allison 5-speeds. Customers can specify manual, automated or automatic across the whole weight range.

Fuel savings are not immediately obvious, but there appear to be some savings to be made if you look hard enough. And Iveco has. The company claims that in 'mixed' operation, the new Euro 6 Eurocargo returns the same fuel and Adblue consumption as the outgoing, Euro 5 models. If the truck is to be used on a greater percentage of distance work, then savings of up to 2% could be made.

Iveco claim that the biggest fuel savings are to be made in the specification of the high powered 210hp 4-cylinder instead of the 220hp 6-cylinder, where savings of around 4.5% could be made. 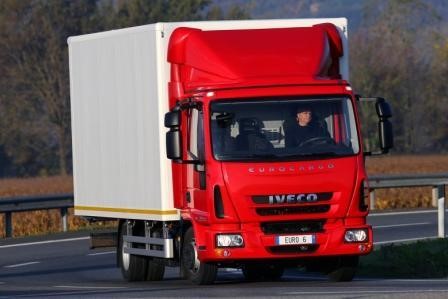 Iveco have taken the opportunity to upgrade their active safety systems, prior to European legislation forcing manufacturers to install systems. Branded Enhanced Vehicle Stability Control (EVSC), the anti skid mechanism will come as standard on trucks over 12 tonnes GVW. Customer can opt for the "Hill Holder" system in addition to the EVSC which takes control of hill starts to avoid rolling backwards.

The Euro 6 Eurocargos resemble the outgoing models to such an extent that the service intervals remain the same. Whilst no commitment to maintain R&M prices has been made, as yet, Iveco have said, "we have maintained the same service intervals and therefore the same cost structure"