There is nothing quite as impressive in the haulage industry as the leviathans of true heavy haulage, and Mercedes has shaken up that glamorous sector by introducing two new true heavy hitters. The new models will be built in-house in the Custom Tailored Trucks division (CTT) of Daimler trucks, where they are used to making exotic and specialist trucks. This is an unusual move by Mercedes. It is conventional wisdom that a market has to be of a certain size before a giant such as Mercedes can enter it. Tooling up assembly lines is a costly business and most big manufacturers look for consistency and volume to make these sums add up. This is the reason why there is such a big aftermarket industry which specialises in building specific niche body types on to the basic chassis cab.

For the most part, the investment simply isn't worth it and the market will not stand the price created by the level of investment required divided by the number of units sold. Mercedes itself has previously been of the same opinion. This is why the company pulled out of the in-house manufacture of its heavy-haulage chassis Actros back in 1996. Instead, it farmed out that production to its external contractor, Titan.

Looking for an explanation for Mercedes' change of heart, it seems that the answer may lie in a different sort of power completely. Stefan Buchner, who is Mercedes' head of trucks, has pointed to strong growth in the heavy-haulage market and attributed it to two factors. These appear to be a huge increase in oil exploration in China, which requires more power to cope with its growth, and the growing wind turbine industry in Europe. The two industries could not be more different but together they make up a niche where Mercedes sees the opportunity for profit. 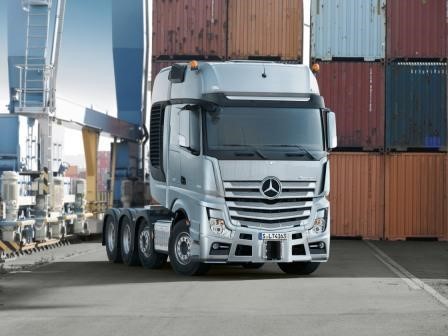 Mercedes SLT Heavy Haulage
To profit from this niche, it has created a dedicated CTT facility in Molsheim in the east of France. The mainstream Mercedes plant at Worth limits chassis modifications to 15 hours, but the CTT facility will handle those projects requiring more customisation and is capable of producing 8,000 such vehicles per year. This plant will use the new Actros model with its Euro 6 compliant engines to tackle production of the new Schwer Last Transport vehicle. Production of this heavy mover will now be taken away from Titan and moved in-house to the Mercedes hand-built assembly line at the Molsheim factory.

The two new models will be based on the existing Actros and Arocs platforms and will be powered by the 625hp 15.6 litre OM473 six-cylinder inline engine. With 3,000 Nm of torque and a 16-speed Powershift AMT transmission, the new power train promises to be impressive. Mercedes will also add a turbo retarder clutch, which will provide wear-free starting and more than 1,000hp of braking power. Both of the new models are rated at a whopping 250 tonnes to do STGO duties. The Actros version of the SLT is being produced as a 6x4 or 8x4 and comes in a choice of three wheelbases. The Arocs, meanwhile, extends the versatility further with a choice of six wheelbases and five different chassis layouts, incorporating both 6x6 and 8x8 versions.
Category: Truck and Trailer News
Tags : mercedes benz actros mercedes benz trucks
Tags
mercedes benz actros mercedes benz trucks
Blog Archive
East Midlands’ JC Balls & Sons Specifies MirrorCam Feature In Its New Mercedes-Benz Arocs Truck
MirrorCam eliminates a truck’s side mirrors and replaces them with a system of cameras, which feed live video to 15-inch displays mounted in the cab on the two A-pillars. ...
Read More
Maritime Transport Wraps Up Acquisition Of 100 New Mercedes-Benz Actros Trucks
The firm’s recent order represents its first new trucks to bear the three-pointed star since 2017. ...
Read More
MAN Truck & Bus At Work On The ANITA Project’s Self-Driving Vehicles For Hub-To-Hub Logistics Routes
After the development and implementation phase, the software and an autonomous MAN truck—with a safety driver on board—will begin testing in real-world operations in Ulm. ...
Read More
Scania Partnering To Test Feasibility Of Long-Haul Electrified Trucks Powered By Overhead Wires
The electric road system is seen as one of the most technically viable and economically attractive options for the electrification of heavy-duty trucks because it uses known and available technologies in new ways. ...
Read More
Waste Management Specialist Receives Two High-Spec Mercedes-Benz Trucks
Select Environmental Services has purchased trucks from other manufacturers in the past, but chose dealer City West Commercials because they “tick every box” on every order, the firm says. ...
Read More
Isuzu 3.5-Tonne Grafter Wins 9th Consecutive Best Builders’ Truck Award
Trade Van Driver’s annual awards are judged by the magazine’s expert panel of journalists and readers who use light commercial vehicles. ...
Read More
Low Cab Entry Drives Highway Maintenance Specialist’s Acquisition Of Volvo FE Tippers
Ringway of West Sussex has added three 26-tonne Volvo FE 6x2 rigid tipper trucks to its UK-wide fleet. ...
Read More
IVECO Launches Projects To Promote The Benefits Of Natural Gas & Its Key Role In Decarbonizing Transport
?The “IVECO Ambassador” programme aims to raise awareness of the brand’s values on different themes. ...
Read More
IVECO’s Brescia, Italy, Production Plant Manufactures 600,000th Eurocargo
The milestone-setting Eurocargo is powered by compressed natural gas (CNG), which Plant Director Marco Colonna says reaffirms IVECO’s commitment to sustainable transportation. ...
Read More
PRM Green Technologies Sticks With Mercedes-Benz Actros For Equipment Recycling Transport
The firm has acquired a second Mercedes-Benz Actros 2540 LnR, this one a member of the fifth-generation Actros range introduced to the UK in 2019. ...
Read More