The new Volvo FH has won a prestigious design award at BMW Welt in Munich. The iF awards have been running since 1953 and are recognised the world over as a seal of quality in design. The Volvo FH won the award for category 1: Transportation Design and Special Vehicles. This was one of 17 categories, only featuring the very best in international design. The demanding award criteria included quality of design, degree of innovation, functionality, environmental impact and safety. iF jury chairman, Prof. Fritz Frenkler, praised the other entries for consistently high quality and a real flair for innovation and design among the shortlisted manufacturers. 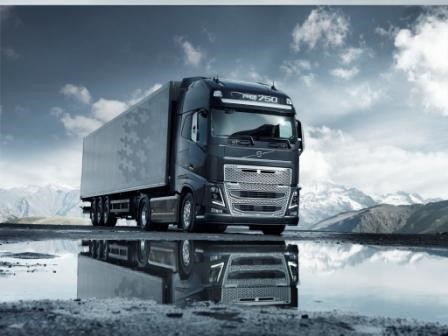 | New Volvo FH16 750 |
Volvo's design director, Rikard Orell, welcomed the award and said that it represented an acknowledgement of the years of hard work, creativity and innovation that went into developing the Volvo FH. The new truck has both passive and active safety systems, better handling, excellent ergonomics and new fuel-saving features. The design ethos of the Volvo FH was to continue the Volvo heritage but push the boundaries of truck manufacture. According to Mr Orell, more focus was placed on design and emotional aspects of the Volvo FH, areas not normally a priority in truck design. Rikard says that Volvo looked at every feature line, function, angle, curve and surface material to ensure the creation of a cohesive truck. This has resulted in a vehicle that is immensely practical but also emotionally satisfying to own and drive. The truck, says Rikard, is the perfect example of form and function working together, with no conflict between the two.

When building the new Volvo FH, the design team was briefed to keep the distinctive personality and dynamic attitude of the existing FH but highlight the better efficiency and heightened quality of the new model. The design language is similar to that of some car manufacturers, such as Ford's 'Kinetic Design' look. This is meant to make it look as if the truck is moving, even when it is stationary. The Volvo FH also has an aggressive stance, with a profile that looks as if it might be leaning forward and straining at the leash to be on its way. This agile appearance is no accident. It is designed to appeal to prospective operators by looking as if the truck is eager to get on with the work in hand. Volvo also had a winner in another iF category, with the Volvo Construction Equipment division landing an award for the ECR88D excavator.

It has been a successful time for Volvo of late. The Volvo FH also won the 2014 International Truck of the Year award, with its innovative cab, advanced maintenance features and hi-tech driveline all singled out for praise by the judges. The company has also won a prize for the best truck telematics system for the company's Remote Diagnostics tools, which allow for proactive diagnostics and the forward planning of repairs and maintenance. The Volvo FH was back on the red carpet to collect the Red Dot design award and also won a gong for its product launch marketing campaign. Part of that campaign was a stunt by Jean-Claude Van Damme, where he balanced between two racing Volvo FH trucks. The Dynamic Steering system that made this stunt possible also got a quality innovation award from the Swedish Institute for Quality.
Category: Truck and Trailer News
Tags : volvo fh volvo trucks
Tags
volvo fh volvo trucks
Blog Archive
Glenfiddich & IVECO Partner To Decarbonise Transport Operations
The “Fuelled by Glenfiddich” initiative will use natural gas-powered Stralis trucks fuelled by waste products from the distillery. ...
Read More
Leyland Trucks’ Battery-Powered DAF LF Electric Trucks Participating In Government Trial
The project is part of the UK Government’s £20 million road freight trials for zero-emission vehicles in support of Department for Transport carbon reduction goals and delivered using the Small Business Research Initiative (SBRI). ...
Read More
Coventry Scaffolding Buys Its First Mercedes-Benz Truck, Quickly Orders A Second
The 70-year-old firm recently purchased a 26-tonne Arocs 2530L with MirrorCam technology to comply with London’s Direct Vision Scheme (DVS), as most of its work takes place in the city. ...
Read More
East Midlands’ JC Balls & Sons Specifies MirrorCam Feature In Its New Mercedes-Benz Arocs Truck
MirrorCam eliminates a truck’s side mirrors and replaces them with a system of cameras, which feed live video to 15-inch displays mounted in the cab on the two A-pillars. ...
Read More
Maritime Transport Wraps Up Acquisition Of 100 New Mercedes-Benz Actros Trucks
The firm’s recent order represents its first new trucks to bear the three-pointed star since 2017. ...
Read More
MAN Truck & Bus At Work On The ANITA Project’s Self-Driving Vehicles For Hub-To-Hub Logistics Routes
After the development and implementation phase, the software and an autonomous MAN truck—with a safety driver on board—will begin testing in real-world operations in Ulm. ...
Read More
Scania Partnering To Test Feasibility Of Long-Haul Electrified Trucks Powered By Overhead Wires
The electric road system is seen as one of the most technically viable and economically attractive options for the electrification of heavy-duty trucks because it uses known and available technologies in new ways. ...
Read More
Waste Management Specialist Receives Two High-Spec Mercedes-Benz Trucks
Select Environmental Services has purchased trucks from other manufacturers in the past, but chose dealer City West Commercials because they “tick every box” on every order, the firm says. ...
Read More
Isuzu 3.5-Tonne Grafter Wins 9th Consecutive Best Builders’ Truck Award
Trade Van Driver’s annual awards are judged by the magazine’s expert panel of journalists and readers who use light commercial vehicles. ...
Read More
Low Cab Entry Drives Highway Maintenance Specialist’s Acquisition Of Volvo FE Tippers
Ringway of West Sussex has added three 26-tonne Volvo FE 6x2 rigid tipper trucks to its UK-wide fleet. ...
Read More