A Review of the Tipper Market

A healthy demand for tippers and tipper trailers looks set to keep body builders busy over the coming months as the orders roll in. 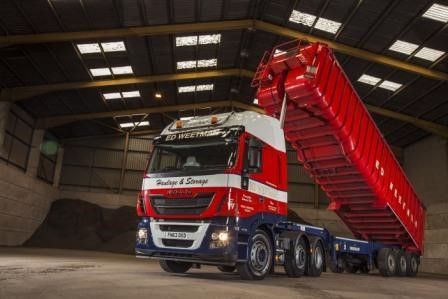 "The market is incredibly buoyant and shows no sign of declining," says Dick Woods, a consultant to tipper builder Abbas Trucks.

"We've got a fair amount of work on and we really can't complain," says Tipmaster managing director, Matthew Terry. "We're attracting plenty of business from both the public and the private sector and we should end up producing nearly 500 bodies this year."

Much of Tipmaster's output is on 3.5-tonne chassis and registrations of 3.5-tonne tippers have risen over the past 12 months.

"Some trailer and body builders are quoting April 2015 delivery dates but fortunately we're able to work on an 8- to 10-week lead time at present," says Paul Avery, managing director of Schmitz Cargobull. "As a consequence we've been able to pick up a fair amount of business, especially from some of the smaller hauliers.

"We've supplied a number of tipper trailers to operators who transport scrap metal, we've sold quite a few with aggregate bodies too and we've just delivered one with an alloy body to somebody who transports sugar beet." 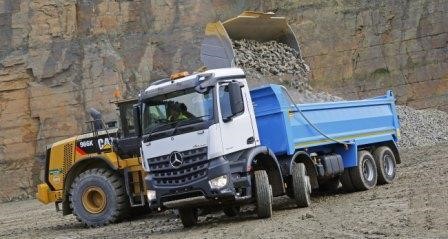 Growing market confidence is prompting body builders to invest. Wilcox for example was about to open a new 3,000sq m factory at its Market Deeping, Lincolnshire, site at the time of writing.

Thompsons has recently acquired a third factory in Blackburn which it is now kitting out and an additional unit in Croydon says group director, Scott Burton. "We built 125 bodies in October across the entire business and we're aiming to increase output by up to eight units a week," he says.

Representing a £2m-plus investment, the new Blackburn site will cover around 5,300sq m and is scheduled to open in January 2015.

Strong demand is prompting some manufacturers to ease prices upwards after enduring some lean times during the recession. "We've been trying to nudge them up a little bit of late," admits Avery.

Payload remains a key concern for tipper operators. Many of those who run 3.5-tonners favour bodies with steel floors but aluminium tailboards and sides to keep payload at a respectable level with some even opting for all-alloy bodies; despite the substantial price premium.

"A steel and aluminium body will give you a 1.1- to 1.3-tonne payload capability," says Ingimex managing director, Justin Gallen. 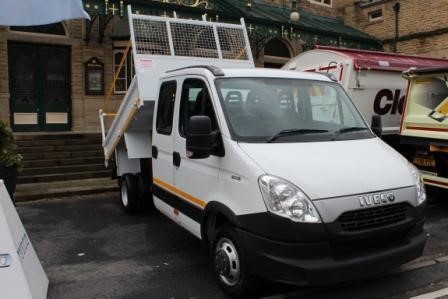 Weight is a concern at the heavier end of the scale too, with tipper builder Aliweld suggesting some months ago that the permitted gross weight of an eight-wheeler should be increased from 32 to 33 tonnes. The idea is to compensate for the increase in un-laden weight imposed by Euro 6 technology and the growing need for hauliers to fit additional safety equipment; side guards, rear under-run bars, cameras and so on

A rise to 32.5 tonnes would probably offset the extra burden and allow operators to maintain existing payloads. The extra payload capacity offered by a move to 33 tonnes would however help them to earn the cash needed to pay for the extra safety kit.

In the meantime body builders are doing all they can to squeeze the last kilo of payload out of the existing weight limits. Aliweld for instance has launched a monocoque alloy body for the Euro 6 Mercedes-Benz Arocs eight-wheeler that can carry 20 tonnes.

The need to avoid overloading has prompted tipper operators to fit onboard weighing systems for many years.

Red Forge has just launched its new Axalert Excel axle load indication system. Designed for rigids grossing at from 7.5 to 32 tonnes, it gives tonnage read-outs for front and rear axles along with the gross vehicle weight on a single in-cab display.

A graduated bar graph gives a visual indication of when the maximum loadings allowed are being approached. The unit includes a full complement of warning messages as well as an audible over-loading alarm.

As hinted earlier, in common with other body builders tipper producers have had to cope with European Community Whole Vehicle Type Approval (ECWVTA).

As a major group that sells all over the EU and beyond, Schmitz Cargobull has embraced ECWVTA in its entirety says Avery. As a business that sells solely in the UK these days however Tipmaster has gone the less-onerous National Small Series Type Approval route. 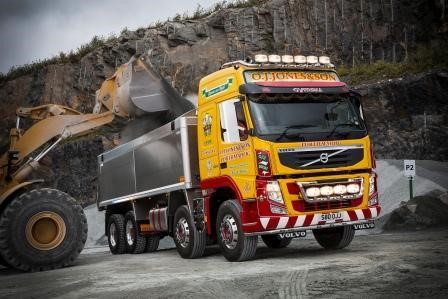 "That suits us down to the ground although we occasionally have to go the Individual Vehicle Approval route if we take a special job on," Terry says.

In this context it is perhaps worth noting that Axalert Excel has undergone full Type Approval testing and has achieved Vehicle Certification Agency approval says Red Forge which means it can be installed during the build stage of vehicles prior to registration. All other components fitted have to meet similar approval requirements.

Operators are eager to get the maximum use of the vehicles they acquire. That is particularly the case with the public sector, where every penny has to be made to count in the current climate of austerity.

Econ has equipped them with a quick-change body system which allows them to be fitted with a gritter and a snow plough when winter bites. When winter is over the kit can be removed allowing them to be deployed as straightforward tippers on duties such as highway maintenance work during the rest of the year. 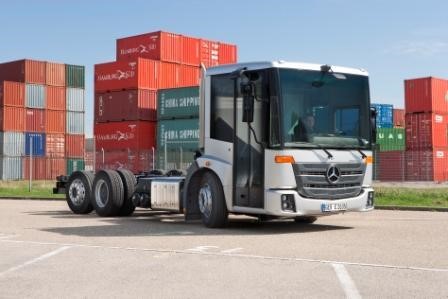 Concerns over cyclist safety in London in particular are obliging tipper operators to have a re-think about the sort of vehicle they run there. One or two are trialling the low-entry Mercedes-Benz Econic refuse collection chassis in tipper applications because it gives drivers a better view of vulnerable road users; a group which includes motorcyclists and pedestrians as well as bicycle riders.

In response Mercedes plans to launch an 8x4 Euro 6 Econic next year which will join the existing 4x2, 6x2 and 6x4 variants. "We're already talking to customers about it," says Burton.

A key player in the drive to make the capital safer for vulnerable road users is CLOCS; the Construction Logistics and Cyclist Safety working group. The ideas it is developing are sure to influence best practice not just within London, but beyond, over the next few years.
Category: Truck and Trailer News
Tags : tippers
Tags
tippers
Blog Archive
East Midlands’ JC Balls & Sons Specifies MirrorCam Feature In Its New Mercedes-Benz Arocs Truck
MirrorCam eliminates a truck’s side mirrors and replaces them with a system of cameras, which feed live video to 15-inch displays mounted in the cab on the two A-pillars. ...
Read More
Maritime Transport Wraps Up Acquisition Of 100 New Mercedes-Benz Actros Trucks
The firm’s recent order represents its first new trucks to bear the three-pointed star since 2017. ...
Read More
MAN Truck & Bus At Work On The ANITA Project’s Self-Driving Vehicles For Hub-To-Hub Logistics Routes
After the development and implementation phase, the software and an autonomous MAN truck—with a safety driver on board—will begin testing in real-world operations in Ulm. ...
Read More
Scania Partnering To Test Feasibility Of Long-Haul Electrified Trucks Powered By Overhead Wires
The electric road system is seen as one of the most technically viable and economically attractive options for the electrification of heavy-duty trucks because it uses known and available technologies in new ways. ...
Read More
Waste Management Specialist Receives Two High-Spec Mercedes-Benz Trucks
Select Environmental Services has purchased trucks from other manufacturers in the past, but chose dealer City West Commercials because they “tick every box” on every order, the firm says. ...
Read More
Isuzu 3.5-Tonne Grafter Wins 9th Consecutive Best Builders’ Truck Award
Trade Van Driver’s annual awards are judged by the magazine’s expert panel of journalists and readers who use light commercial vehicles. ...
Read More
Low Cab Entry Drives Highway Maintenance Specialist’s Acquisition Of Volvo FE Tippers
Ringway of West Sussex has added three 26-tonne Volvo FE 6x2 rigid tipper trucks to its UK-wide fleet. ...
Read More
IVECO Launches Projects To Promote The Benefits Of Natural Gas & Its Key Role In Decarbonizing Transport
?The “IVECO Ambassador” programme aims to raise awareness of the brand’s values on different themes. ...
Read More
IVECO’s Brescia, Italy, Production Plant Manufactures 600,000th Eurocargo
The milestone-setting Eurocargo is powered by compressed natural gas (CNG), which Plant Director Marco Colonna says reaffirms IVECO’s commitment to sustainable transportation. ...
Read More
PRM Green Technologies Sticks With Mercedes-Benz Actros For Equipment Recycling Transport
The firm has acquired a second Mercedes-Benz Actros 2540 LnR, this one a member of the fifth-generation Actros range introduced to the UK in 2019. ...
Read More