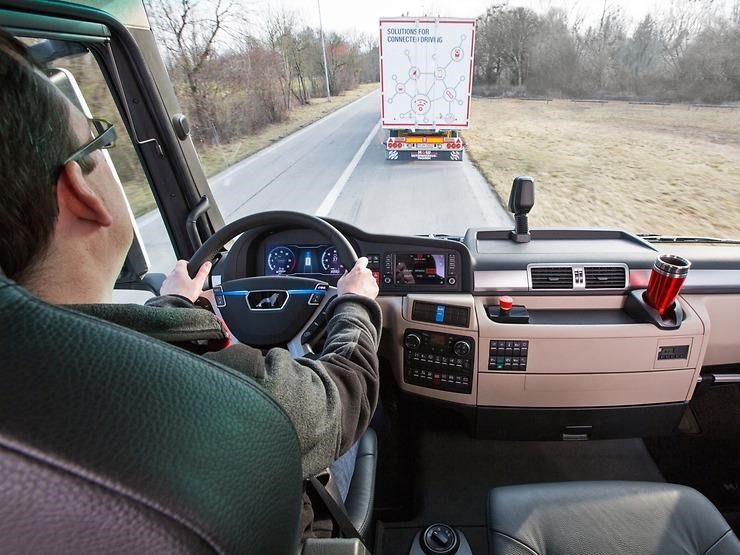 Autonomous interconnected trucks are beginning to become more common on roads across Europe and in other parts of the world as platooning trials operated by a number of HGV manufacturers increase in number.

This month a pair of new projects have got under way, the first of which is being operated by MAN Truck & Bus in Germany.

The first of its close-knit convoys got on the road on the 13th of February, with logistics firm DB Schrenker using them to transport goods over long distances from Munich to Nuremberg on public roads.

The intention is to see how well the platooning technology can cope with the wide variety of scenarios that are inevitably thrown up when having to navigate routes shared with other drivers.

One interesting piece of progress which is being made with this particular trial is that the people behind the wheels of the trucks, tasked with monitoring performance, are actually professional hauliers rather than people who work for MAN's engineering team.

This should give truck drivers a better idea of how platooning capabilities will impact their involvement in controlling the HGV. And this is something that project organiser Professor Christian Haas is eager to analyse, getting responses from drivers to see how they feel about the emergence of this technology.

A lot of training is being provided to the drivers involved to ensure that they can take full advantage of the trucks and get a handle on the features that are made possible with platooning. But all the theoretical preparation in the world is no match for real-world experience, which is why this trial is so significant.

The trucks are effectively coupled to one another, but the tethers are electronic rather than physical. The truck at the front takes care of everything from acceleration and braking to steering, and then this data is relayed almost instantly to the following vehicles in the convoy so that they can react in unison.

Efficiency improvements and increased safety should be part and parcel of platooning systems, although more testing is required to prove these claims are achievable.

Meanwhile, over in Japan a platooning trial operated by Fuso Trucks took place at the start of February, with HGVs driving both on highways near Tokyo and within the city itself to see how urban operations are handled.

The need for autonomous trucks is felt especially keenly in Japan, because there is a serious shortage of drivers and no sign that these roles will be filled in the near future. So taking humans out of the picture altogether provides a ray of hope for logistics operators in the country.