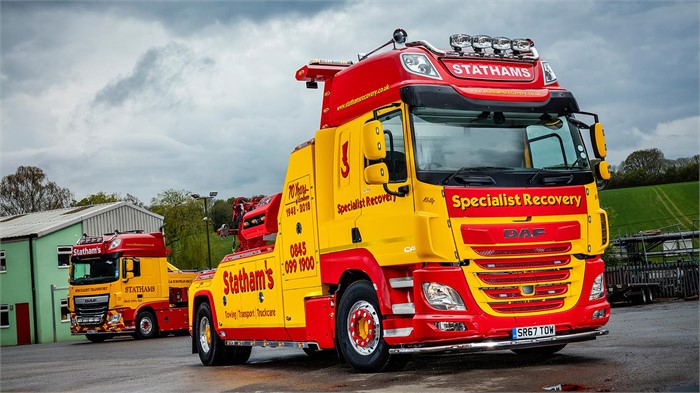 Statham’s DAF New CF 530 FA 4x2 truck features a 13-litre engine that produces up to 530 horsepower as well as NRC recovery bodywork and other custom add-ons for its vehicle recovery operations. (Photo courtesy of DAF.)

Statham’s Motor Engineers, based in Dunstable in Bedfordshire, England, recently introduced a DAF New CF 530 FA 4x2 rigid into its fleet. The 80-tonne truck features NRC recovery bodywork, a 13-litre engine that can produce up to 530 horsepower, and a fuel economy averaging around 15 kilometres per gallon. There is also an option for a tag-axle conversion, which can be accomplished in about 30 minutes and enables the truck to tow larger vehicles.

“We wanted greater operational flexibility,” said John Statham, owner of Statham’s Motor Engineers, in a press release. “The NRC crane and winches mean we can recover almost any car and light commercial vehicle, but,” he said, “it is the versatility of the interchangeable axle which allows us to lift heavier vehicles above 14 tonnes and up to 44 tonnes. We now have one vehicle fulfilling the role of two. Fuel economy from such a big engine is an extremely welcome bonus, and is a significant improvement on our previous, lower-powered DAF CF.”

Statham’s made the New CF its own by adding not only the NRC bodywork, but also a 25-tonne sliding crane, dual winches, under-lift equipment, lockers, and other custom bodywork. HTC Hemel, which is a local service point for DAF Trucks, will handle ongoing support for the truck, but Statham’s purchased the New CF from North West Trucks, a DAF dealer out of Liverpool. Statham’s has a strong relationship with DAF and is a vehicle recovery outlet for DAFaid, which provides breakdown services all across the UK.

If you’re interested in purchasing a used DAF CF truck of your own, you’ll find some for sale on TruckLocator, in addition to a wide range of nearly new DAF trucks for sale.