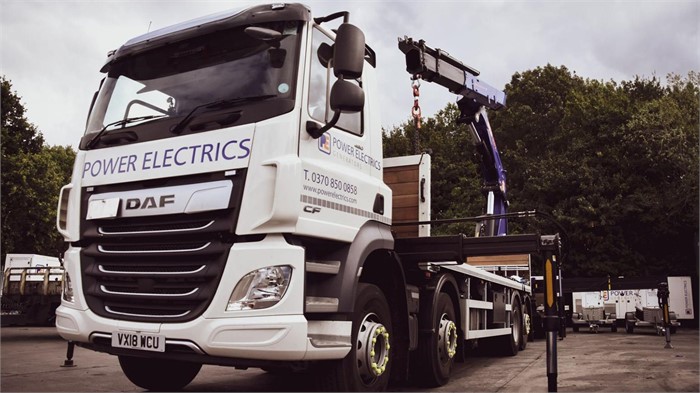 DAF Trucks had a display of vehicles running on HVO fuel at this year’s LoCITY Annual Conference, including a New CF 480 8x2 rear-steer drawbar on loan from national generator supplier Power Electrics. (Photo courtesy of Jake William Self at Power Electrics.)

DAF Trucks recently showcased vehicles running on Hydro-treated Vegetable Oil (HVO) at the LoCITY Annual Conference, which took place on September 5 at the Kempton Park Racecourse in Sunbury-on-Thames in Surrey. Trucks on display included the Showtrekker, the New XF, and a New CF 480 8x2 rear-steer drawbar owned by Power Electrics, all of which travelled to the event running on HVO. HVO is a clean-burning alternative fuel source that can reduce greenhouse gas emissions by 90 percent or more. HVO fuel supplier Green Biofuels will also be at the event alongside DAF Trucks with its Green D product.

All of DAF’s New LF, New CF, and New XF models not only run on HVO fuel, but also Gas-to-Liquid (GTL) fuel, which is similar to HVO but is derived from natural gas, without any modifications. This opens the trucks up to a wide range of potential applications, as evidenced by a recent trial with Brakes, a foodservice supplier. The company used 50 New LF 230 fridge trucks running on Shell GTL fuel to achieve NOX emission reductions of 47 percent. Another example is Power Electrics, in a partnership with Green Biofuels, transporting fuel storage tanks and mobile fuel bowsers full of HVO on DAF trucks to concerts and other events to power its generators.

“HVO is going to see a step-change in how conventional diesel engines are fuelled,” says Power Electrics Director John Pullin. “We now market our generator products alongside the green credentials provided by HVO. We are using HVO in our DAF fleet, which totals 28 units, and includes specialist multi-axle configurations with cranes. When running on HVO we are achieving a 90 percent reduction in our carbon emissions, as well as improving air quality, and we don’t have to worry about chassis packaging, vehicle range, or any of the other complications associated with other alternative fuels.”