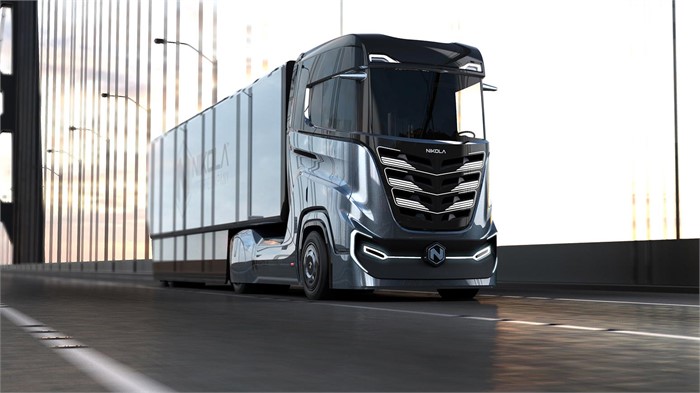 The Nikola Tre is a hydrogen-electric truck that offers up to 1,000 horsepower and a maximum range of 1,200 kilometres, depending on the configuration. (Photo courtesy of Nikola Motor Company.)

Nikola Motor Company recently revealed the Nikola Tre (Norwegian for “three”), a new hydrogen-electric truck specifically designed for the European trucking industry, and announced that it is open for reservations. The truck is available in 6x2 and 6x4 configurations, offers a range of 500 to 1,000 horsepower, and has a maximum range of between 500 and 1,200 kilometres. Nikola plans to begin testing the Tre in 2020 in Norway, and has begun searching for the right site in Europe to establish a manufacturing plant.

“This truck is a real stunner and long overdue for Europe,” says Trevor Milton, founder and CEO of Nikola Motor Company. “It will be the first European zero-emission commercial truck to be delivered with redundant braking, redundant steering, redundant 800Vdc batteries, and a redundant 120-kilowatt hydrogen fuel cell, all necessary for true level 5 autonomy. Expect our production to begin around the same time as our USA version in 2022-2023.”

Nikola is working with Oslo, Norway-based Nel Hydrogen to install several hydrogen stations throughout the United States with the ultimate goal of having over 700 of them in place by 2028 in the U.S. and Canada. For Europe, Nikola says it plans on opening stations starting in 2022 with hopes “to cover most of the European market by 2030.” The stations can produce anywhere between 2,000 kilograms and 8,000 kilograms of hydrogen every day.

See It In Person

Registration for Nikola World, which will be held in Phoenix, Arizona, on 16-17 April 2019, opens on 3 December 2018. The event will offer attendees an opportunity to see a prototype of the Nikola Tre in person as well as get a look at the Nikola Two, both of which will put on trailer hauling demonstrations. The company will also demonstrate hydrogen filling at 700 bar.

While you wait for your Nikola Tre preorder to come through, browse or search this site and you’ll find thousands of used trucks for sale.