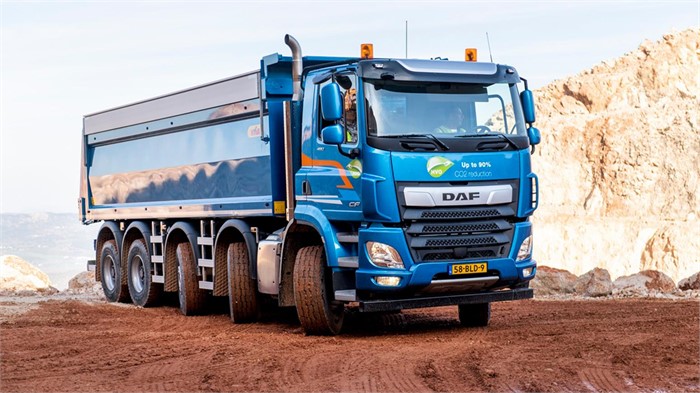 This DAF CF model features the FAW chassis, which is now available on XF models and offers a more spacious cab. (Photo courtesy of DAF.)

At this year’s Commercial Vehicle Show, which ran from 30 April to 2 May in Marston Green, Birmingham, DAF Trucks introduced several new axle options and vehicle configurations for its extensive lineup of CF and XF vehicles aimed specifically at customers in the United Kingdom. The two new axle options include a 10-tonne front axle, which joins the 7.5-, 8-, and 9-tonne options already available, and a 7.5-tonne non-steered trailing axle with single wheels that offers a static load capacity of up to 26 tonnes.

The 10-tonne axle is well-suited for trucks with heavy cranes located behind the cab and will be available later this year for CF and XF models with PACCAR MX-11 and MX-13 engines. DAF says the 7.5-tonne axle is “ideal for use on payload sensitive work and in less arduous applications, such as for container delivery systems and for transporting building materials, where the truck is equipped with a rear-mounted crane.”

One of the new vehicle configurations for CF and XF models is the 8x4 FAW with double-drive tandem and steered trailing axle. The new FAW chassis supports a gross vehicle weight (GVW) of up to 32 tonnes and a gross train weight (GTW) of up to 44 tonnes. It has a 15.6-metre turning circle and is designed for off-road use, which makes it a fit for use as a tipper truck, concrete mixer, or crane truck. XF models sporting the FAW chassis also have larger cabs with ample room for driving teams, additional storage, and living space. Another similar option is the XF FAD 8x4, which has two steered front axles and a double drive rear axle. DAF says the FAD is well-suited “for recovery vehicles with heavy lift and long reach cranes.”

The third new configuration is the DAF XF FAX 8x2 rigid, which also supports a GVW of 32 tonnes and GTW of 44 tonnes and features a 7.5-tonne steered trailing axle and two steered front axles with either 8- or 9-tonne ratings. This option, which was already available on CF models, now comes to the XF to improve manoeuvrability and take on applications like hauling building materials or supporting a crane mounted behind the truck’s cab.

Find The Right DAF Vehicle For You

TruckLocator has a hundreds of used DAF trucks for sale, including a large selection of used DAF CF and DAF XF models.