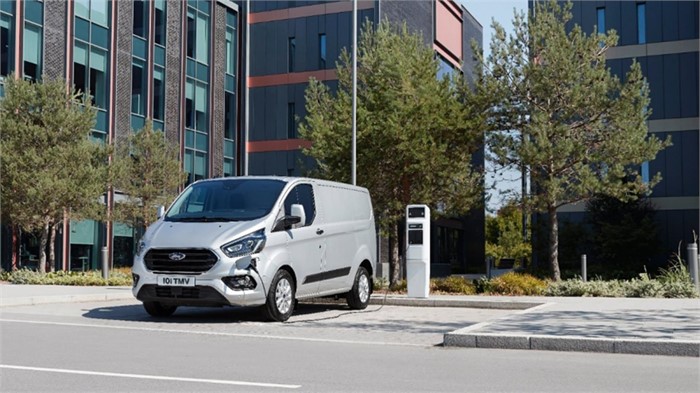 With the help of multiple partners and participants, Ford recently completed a trial consisting of 20 Transit Custom Plug-In Hybrid vans operating around London. The trial yielded valuable feedback that will be funneled into the production model, which is scheduled for release in late 2019. (Photo courtesy of Ford.)

Ford recently completed a year-long PHEV (plug-in hybrid electric vehicle) trial in London with the help of a £4.7 million grant from the Advanced Propulsion Centre, which is funded by the UK Government. The trial involved 20 Ford Transit Custom Plug-In Hybrid vans traveling 240,000 kilometres in an effort to “test whether businesses could carry out the typical daily duties of their diesel-powered vehicles,” while using a “zero-emissions electric-only mode,” Ford says. This would help curb emissions from the commercial vehicles that travel around 13 million kilometres throughout London on the average weekday.

Several urban businesses took part in the trial, including Addison Lee Group, Autoglass, British Gas, Clancy Plant, DPD, Heathrow Airport, Interserve, Mears Group, the Metropolitan Police, Morrison Utility Services, RNLI, Royal Mail, Speedy Hire, Sky, Transport for London, and Vodafone. Ford’s results showed that “75% of the fleet’s mileage in Central London and 49% in Greater London was completed using pure electric power.” The company points out that London does not currently have extensive charging infrastructure in place, but the results show that the vans were still “able to dramatically reduce tailpipe emissions in the inner city” and then switch over to petrol power when necessary.

“These trials have helped Ford and its customers to investigate the extent to which PHEVs can help to achieve urban air quality goals, whilst not compromising on productivity,” says Mark Harvey, director of Ford’s Urban Electrified Van programme. “This trial is the first time Ford has given such early prototype vehicles to customers, and we’ve been able to incorporate their feedback directly into the production van. The response has been overwhelmingly positive – operators don’t want to give them back.”

Ford plans to put on more trials in Cologne, Germany, and Valencia, Spain, in order to collect more unique data and improve future production models. The trials will include Transit Custom Plug-In Hybrid vans, which the company plans to launch by the end of 2019, as well as Tourneo Custom Plug-In Hybrid people movers. Ford is targeting a 50-kilometre zero-emission range and an extended range of 500 kilometres by leveraging a 1.0-litre EcoBoost petrol engine for both models. Owners will be able to charge the battery pack “using a standard 230-volt supply,” according to Ford. The company also plans to launch a new all-electric Ford Transit model in 2021.

If you are in the market for a Ford Transit or other similar model, you will find a large selection of used Ford trucks and vans for sale every day on TruckLocator.