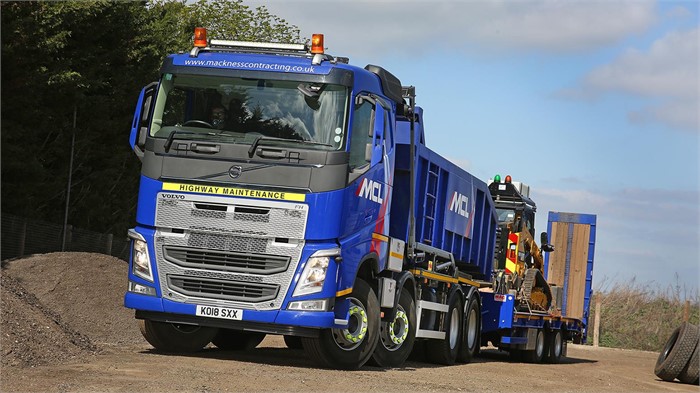 Mackness Contracting, a road construction company based in Stansted, recently added a new Volvo FH model to its 11-vehicle fleet. The 8x2 rigid truck features a D13K engine, which produces 460 horsepower (343 kilowatts) and 2,300 newton metres (1,696 pounds-foot) of torque, and Hyva hook loader equipment. Mackness will use the truck to perform resurfacing work throughout the Midlands and in the South of England. Coupled with a beavertail trailer, the Volvo FH, which was supplied by Volvo Truck and Bus Centre London, will transport a skid-steer loader with a planer head used to “repair small patches of road,” Volvo explains.

A New Flagship For Mackness Contracting

“Because of what we do with the bitumen spraying, the other trucks tend to get very dirty, I wanted a truck that would stand out, when it comes to the planing – a flagship model for the fleet. It can be kept a lot cleaner because it’s doing a different type of work,” says Doug Mackness, director of Mackness Contracting. “Having this setup, which I think is the only one of its kind in the country, means that we can improve efficiency and package everything on the truck that we need for the repairs. We can also be more versatile and keep busy with a good driver who, fortunately, loves the new vehicle.”

Mackness has also covered its new Volvo FH with a three-year Dynafleet contract. Dynafleet is a fleet management system designed to improve fuel efficiency and keep track of carbon dioxide emissions. Mackness Contracting has been operating the FH “for a few months” and Volvo says the company has “noticed a marked improvement in fuel economy,” in comparison to its other vehicles. “We are really pleased with it and think it’s a great addition to the fleet,” Mackness says.

You will find a large selection of new and used Volvo trucks, including a dozens of FH models, for sale at TruckPaper.com.