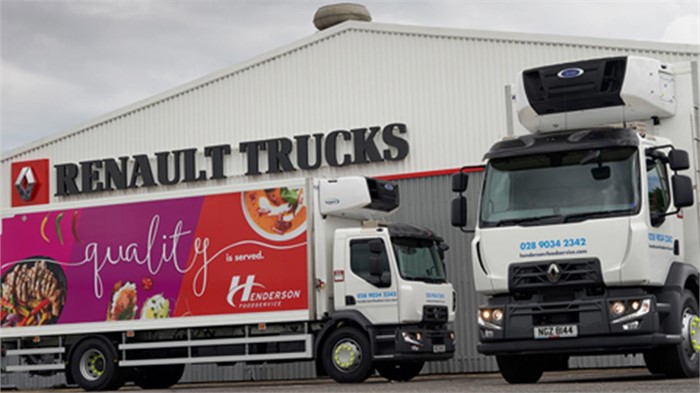 Renault Henderson.png: Henderson Group recently added 15 Renault Range T and 14 Range D models to its fleet. The fleet now consists of around 70 Renault trucks, with more on the way in 2020. (Photo courtesy of Renault.)

The Henderson Group of Newtownabbey, Northern Ireland, recently purchased 15 Renault Range T460 trucks and 14 Range D18 models. The company started out by adding seven Range T460s and one Range D26 back in 2015 and now has roughly 70 Renault vehicles in its fleet, with plans to add more in the near future. One reason for sticking with the brand is driver acceptance. In fact, Henderson Group Fleet Engineer David McCracken says the company recently added two Range T High models to its fleet “as a driver retention tool for long-serving employees, with the Range T being the preferred choice for most of our drivers.”

A Mix Of Models

Henderson Group’s fleet consists of a mix of Range T models, 18-tonne Range D models, and 26-tonne Range D models. The company uses the Range T “to work on regional distribution multi-drops” in Northern Ireland, Renault explains, with some of the trucks performing as many as 70 runs per day. The Range D 18-tonners operate as part of Henderson Group’s foodservice division, while the 26-tonners work for the wholesale division.

“The specifications of the Range D, including the reduced turning circle and compact cab, make it perfect for our wholesale and foodservice operations and allows us to access even the tightest of locations,” McCracken says.

While Henderson Group purchased the Range D models outright, the Range T models are part of a four-year contract hire arraignment with BRS Limited. Because the company is always looking for ways to reduce the impact of its operations on the environment, it opts to bring in “the most modern and environmentally friendly trucks available,” which means replacing rigid trucks every seven years and tractor units every four years, McCracken says. However, he adds that “we are constantly reviewing this and may reduce this even further as new technology is introduced in the future.”

You will find hundreds of used Renault trucks, including a large selection of Range D and Range T models, for sale at TruckLocator.co.uk.