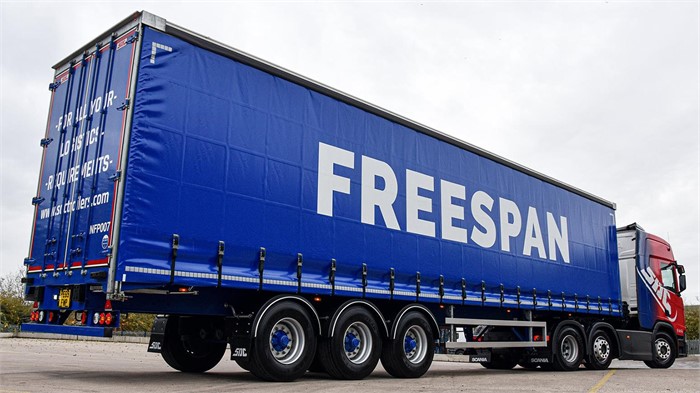 SDC’s Freespan Curtainsider trailer recently launched in the United Kingdom after being available only in Ireland. (Photo courtesy of SDC.)

SDC recently made its Freespan Curtainsider trailer, which was originally available only in Ireland, available to customers in the United Kingdom. In addition, the company now offers a demonstration model of the trailer so potential customers can try it out before they buy it. The EN-XL rated trailer is based on the company’s “robotically welded chassis,” which “ensures unrivalled precision” during the manufacturing process, according to Paul Bratton, chief operating officer of SDC. The company also prides itself on its customisation options, eschewing a “standardised European model” in favor of a “flexible manufacturing process,” Bratton explains. This allows SDC to build trailers to the exact specifications of customers.

More On The Freespan Curtainsider

The main special feature of the Freespan Curtainsider is the 5* easy-roll curtain rail, which the firm says was created by its engineering team as “a low-friction track system for optimum trailer performance.” This technology allows the curtain to slide easily along the rail, and thanks to the curve of the rail, it doesn’t collect dirt, which can negatively impact the curtain’s performance. The trailer itself is made from high-tensile steel and features a “unique bolt-on body, which relieves stress on critical parts of the trailer,” SDC says. It can support a maximum payload of 29,000 kilograms (63,934 pounds).

“Our customers are delighted with SDC’s Freespan Curtainsider, the chassis and curtain technology are some of the best we see on the market, providing an excellent addition to the TIP fleet,” says Karl Davies, UK and Ireland commercial director for TIP Trailer Services. “TIP has purchased in excess of 1,000 SDC trailers over the last year, and the level of quality is unwavering throughout their range. I look forward to working with Paul and the team more in the future and providing SDC’s innovative Freespan trailer to our UK customers.”

You will find a large selection of new and used SDC curtain side trailers for sale on TruckLocator.