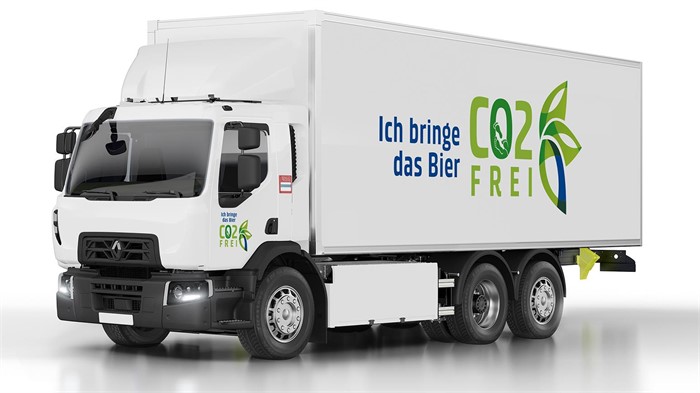 Renault Trucks announced in early February it has agreed to provide global beer brewer Carlsberg Group of Denmark with 20 of its D Wide Z.E. 26-tonne 100% electric trucks. Deliveries will begin this year, with the trucks headed to Carlsberg Group’s Feldschlösschen brewery subsidiary in Switzerland for operation.

Renault produces a range of electric trucks from 3.1 to 26 tonnes. It displayed the D Wide Z.E. at the EVS32 (32nd Electric Vehicle Symposium) in May where Renault Trucks’ François Savoye spoke about applying electric mobility to heavy goods vehicles and the role electric trucks will play in combatting carbon dioxide emissions from heavy-duty vehicles. Renault says its electric trucks are ideally suited to waste collection and distribution operations. Feldschlösschen will use its D Wide Z.E. fleet to make daily delivery rounds spanning 100 to 200 kilometres.

Bruno Blin, Renault Trucks president, says the contract with Carlsberg Group is the first order of this scale in Europe. “It proves to our customers that the transport sector is undergoing a major transformation and reflects an industrial and commercial reality: our Renault Trucks electric trucks are rolling off the assembly line and will be on the roads of Europe in a few weeks’ time,” he says.

You’ll find hundreds of new and used Renault trucks for sale every day on TruckLocator.