DAF recently delivered its first CF Electric 6x2 refuse truck to ROVA, a public waste management specialist based in the Netherlands. This particular model has entered service in Zwolle, and three other similar vehicles will operate elsewhere as part of a refuse collection field test. Several DAF CF Electric 4x2 trucks have been operating in Germany and the Netherlands handling general distribution and deliveries to supermarkets since late 2018, but the company only recently opened it up for limited sale in those countries and Belgium.

The 6x2 CF Electric features a VDL E-power driveline that produces up to 210 kilowatts (280 horsepower) and 2,000 newton-metres (1,475 pounds-foot) of torque, while also producing zero emissions. The battery pack that powers the electric driveline has 170 kWh of gross energy, which DAF says is “sufficient for covering regular garbage collection routes.” The battery pack can be recharged to 80% capacity in roughly 30 minutes, which is ideal for “waste collection trucks” that “typically return to the depot every few hours to unload,” the company adds. This truck also supports a gross vehicle weight of up to 28 tonnes and has a steered trailing that DAF says offers excellent manoeuvrability. 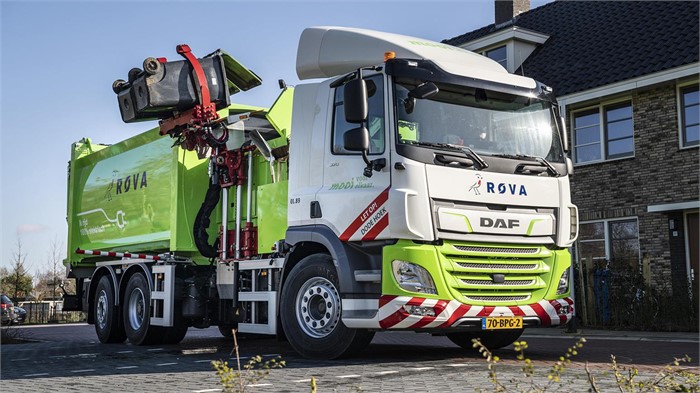 The 170-kWh capacity battery pack can be recharged up to 80% in 30 minutes for quick charging while unloading at a depot. (Photo courtesy of DAF.)

“The DAF CF Electric is just as good and easy to operate as any conventionally powered truck and we truly believe it is important to participate from the start in the energy transition as natural resources are becoming increasingly rare,” says Marco van Lente, general director of ROVA. “It is in our DNA to take care of the future of our planet and the use of low-emission vehicles is part of our sustainability plan.”

You will find hundreds of new and used DAF trucks, including a large selection of CF models, for sale every day at TruckLocator.