The DAF CF Electric supports gross combinations weights of up to 37 tonnes, has a range of roughly 100 kilometres, and features a battery pack that can be quick-charged in 30 minutes or fully charged in an hour and a half. (Photo courtesy of DAF.)

DAF’s range of Electric Innovation Trucks consists of the DAF CF and LF Electric and the CF Hybrid. The two all-electric models produce zero emissions, making them well-suited primarily for urban operations. The hybrid features an efficient diesel engine coupled with an electric motor that allows for zero-emission operations within a certain range, making it a good fit for regional or even long-haul trucking with an all-electric mode available for in-city driving. Read on to learn more about all three models.

This CF Electric, configured as a 6x2 refuse truck, is currently performing field tests as part of ROVA’s operations in the Netherlands. (Photo courtesy of DAF.)

The DAF CF Electric has a maximum gross combination weight (GCW) of 37 tonnes and features VDL’s E-Power Technology. Powered by a 170-kWh lithium-ion battery pack, the electric motor produces 326 peak and 286 continuous horsepower (240 and 210 kilowatts), giving the truck a range of roughly 100 kilometres, or 62 miles. The battery can be quick-charged in 30 minutes or fully recharged in around one and a half hours.

DAF says the CF Electric is ideal for high-volume city distribution and recommends that operators use freight loading and unloading time as an opportunity to charge the battery. The firm currently has a CF Electric 6x2 refuse truck currently in operation with Dutch waste management specialist ROVA. 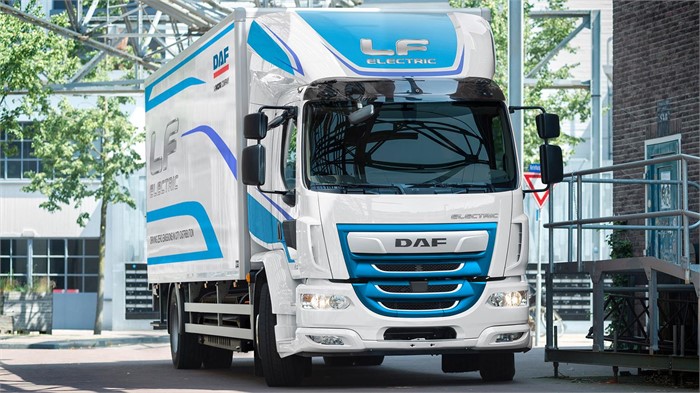 The DAF LF Electric has the longest all-electric range out of the three models at 220 kilometres thanks to a 222-kWh battery pack. (Photo courtesy of DAF.)

The LF Electric is a 19-tonne all-electric vehicle that has a maximum range of 220 km (137 mi) “fully laden,” according to DAF. Rather than VDL E-Power Technology, this model has a Cummins electric motor that produces 340 peak and 266 continuous hp (250 and 195 kW). It also features a modular 222 kWh battery pack that “can be scaled to the range required by customers,” DAF explains. Again, this model is well-suited for working in urban areas, thanks to its low-noise, zero-emission operation. 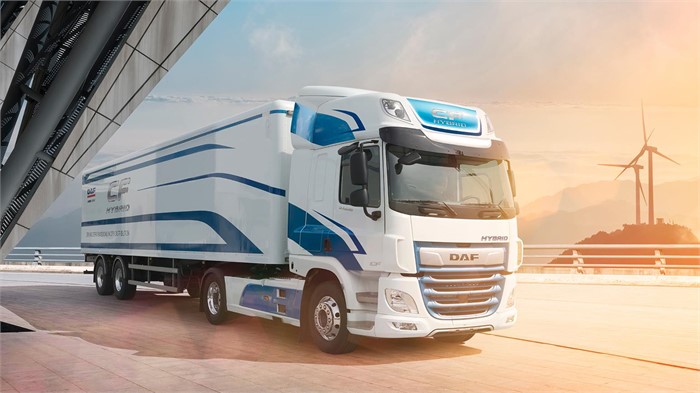 The DAF CF Hybrid has an all-electric range of between 30 and 50 kilometres and a battery pack that can be fully charged in 30 minutes. (Photo courtesy of DAF.)

The DAF CF Hybrid has a 10.8-litre PACCAR MX-11 engine that produces 450 hp (330 kW), a ZF electric motor that produces 175 peak and 100 continuous hp (130 and 75 kW), and a ZF TraXon transmission specifically designed for hybrid vehicles. The 85-kWh battery pack gives the truck a range of between 30 and 50 km (19 and 31 mi) that will fluctuate based on the truck’s payload. The battery pack is also used to deliver power to the truck’s electric compressor and any equipment attached to the optional e-PTO, which DAF says is beneficial when driving “refrigeration equipment on semi-trailers for temperature-controlled transportation.”

This truck is interesting not only because of its hybrid nature, but also because its battery has a fast charge feature that lets it reach an 80% charge in 20 minutes or a full charge in only 30 minutes. Plus, the diesel engine can charge the battery pack while the truck is traveling outside of cities using regenerative energy produced by predictive cruise control, downhill speed control, and the like.

You will find well over a thousand new and used DAF trucks for sale on Truck Locator, including a large selection of CF and LF models.