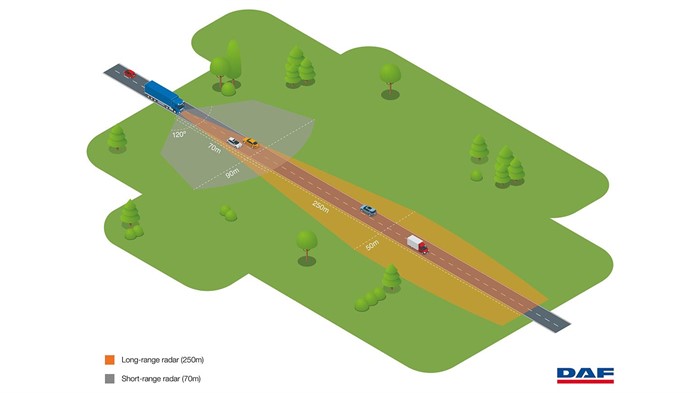 DAF’s AEBS-3, which is now standard on all CF, LF, and XF trucks, has a detection range of 250 metres and a 120-degree near-range angle of view, an increase of 50 metres and 70 degrees over the previous version of the system. (Photo courtesy of DAF.)

DAF recently launched the newest iteration of its advanced emergency braking system, AEBS-3, for its LF, CF, and XF ranges. AEBS can automatically brake while the truck is traveling at speeds of 80 kilometres per hour and below to avoid collisions with moving vehicles as well as stationary objects. It also complements adaptive cruise control and forward collision warning safety features, as the system only applies the brake if the driver doesn’t respond to audible, visual, and haptic alerts.

AEBS-3 has a dual radar system with 16 antennas, which is nine more than the previous generation, allowing “for far and near range detection,” DAF explains. The detection range has increased from 200 to 250 metres for a quicker reaction time and the near-range angle of view has broadened from 50 to 120 degrees for improved collision detection even in low-visibility conditions and inclement weather.

Find Your Next DAF Truck

There are hundreds of new and used DAF trucks for sale on Truck Locator, including a large selection of CF, LF, and XF models.