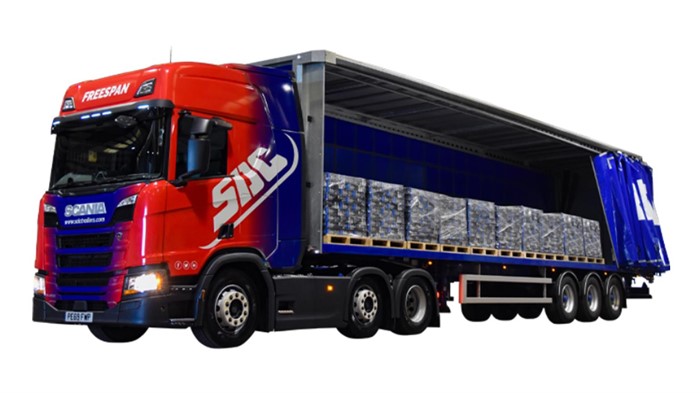 The SDC Freespan Curtainsider is known for its 3.2-metre clear side aperture and low-friction alloy roof curtain rail. (Photo courtesy of SDC.)

Logistics and general haulage operator Elddis Transport of Consett has acquired a number of SDC Freespan Curtainsider trailers for its operations throughout the UK and Ireland. The new curtainside trailers were manufactured at SDC’s recently expanded Mansfield facility in Nottinghamshire.

“Reliable equipment is extremely important for our day-to-day deliveries, and I am pleased with the quality build and high specification on our new Curtainsiders from SDC which will strengthen our service in the demanding fast-moving consumer goods (FMCG) market,” says Elddis Managing Director Nigel Cook. “The trailers are built to EN 12642 XL standard and we have added various extras to enhance loading and safety during use.”

Northern Ireland-based trailer manufacturer SDC has built more than 150,000 Freespan Curtainsiders to this point, but only recently has it introduced the model to the rest of the UK. The trailers offer a 3.2-metre clear side aperture for easy loading and unloading. They’re also known for SDC’s low-friction alloy roof curtain rail with Easy-Roll technology.

SDC constructs the Freespan Curtainsider with a robotically welded, high-tensile steel chassis and a bolt-on-body design. The trailer is available in any length with a straight or step frame. It meets the EN 12642 XL standard for a 29,000-kilogram payload. The Freespan can be configured with a variety of restraints, aerodynamic features, and door, floor, and storage options.

You’ll find a big selection of new and used SDC semi-trailers available for sale on Truck Locator, including a number of SDC curtainside trailers.