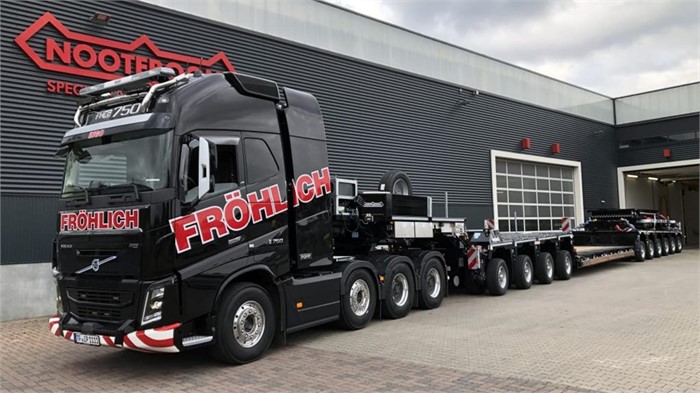 A crane company near Berlin has become the first in Germany to use a long, 4+6 EURO-PX low loader trailer train from Nooteboom. (Photo courtesy of Nooteboom.)

A young crane company located near Berlin has become the first in Germany to use a long, 4+6 EURO-PX low loader trailer train from Nooteboom. The Rangsdorf-based firm, Fröhlich Bau Kran und Baustellenlogistik, purchased the extendable, 10-axle train along with a two-axle IC Interdolly and various loading floors to transport loads of more than 85 tonnes. The highly configurable EURO-PX is optimised for German road regulations with an axle spacing of 1.51 metres.

“Nooteboom has an excellent reputation in the field of low loaders with hydraulically steered pendulum axles. Moreover, the low loaders are very easy to operate for our drivers compared to alternative brands,” says Fröhlich owner and MD Rainer Frohlich. “The big advantage is that we can now easily combine all types of low-loader configurations. For us this is a much cheaper and more efficient alternative than the more complex and more expensive module trailers.” 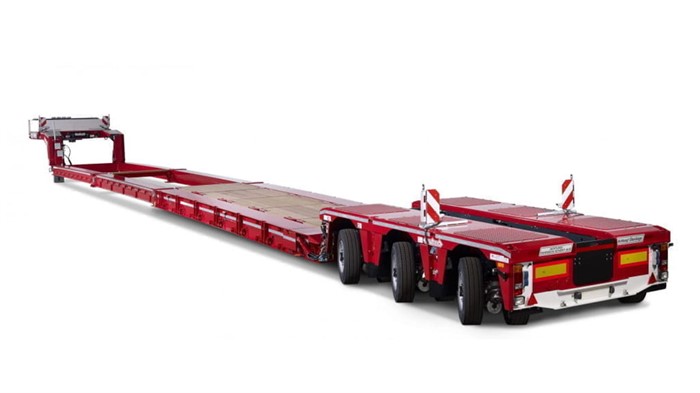 The configurability of Fröhlich’s new Nooteboom train allows it to transport long, wide, and heavy loads including crawler cranes and bridge constructions. Besides its four-axle interdolly and six-axle bogie, the package the crane company purchased includes an extendable wide load floor, an extendable spine bed, close-coupled bridge pieces, loading ramps and carriers, and 5-metre extension beams. Using various combinations, the 4+6 EURO-PX train can accommodate loads of more than 100 tonnes or up to 40 m in length.

Fröhlich uses the database of NoVAB, Nooteboom’s axle load calculation program, to keep track of the train’s many configurations and their suitability for each load. NoVAB also indicates how the load should be positioned on the trailer train to avoid an overweight condition on one or more axles. A built-in tyre pressure monitoring system (TPMS) developed by Goodyear keeps watch over the trailer train’s 44 tyres. 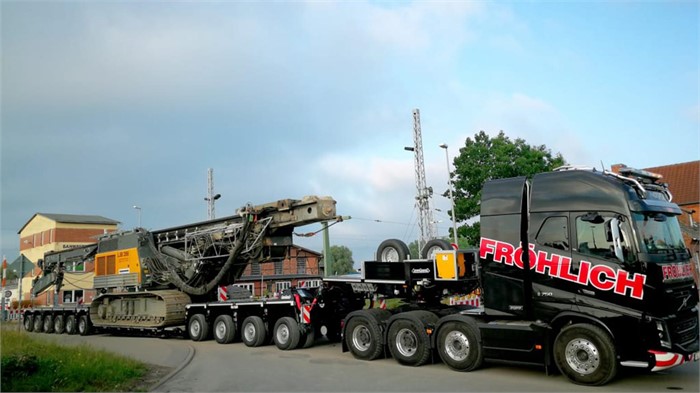 Using various combinations, the 4+6 EURO-PX train can accommodate loads of more than 100 tonnes or up to 40 m in length. (Photo courtesy of Nooteboom.)

Nooteboom’s EURO-PX gooseneck low loader features the company’s patented Pendel-X pendle axles and a deep excavator trough in the axle bogie. The manufacturer builds it to provide a modular trailer’s suspension stroke, steering angle, manoeuvrability, and load carrying abilities in an alternative platform. It can be equipped with axle bogie widths from 2.52 to 2.99 m, two to six rear pendle axle lines with spacings of 1.36 or 1.51 m, and an 80 km/h load rating of 12 or 14 tonnes per axle.

Fröhlich has also bought other Nootebooms as its fleet of 45- to 450-tonne truck-mounted cranes, tower cranes, and others has expanded. In recent years, it has acquired 14 Ballasttrailers and semi-low loaders from the trailer manufacturer.

The sellers on TruckLocator.co.uk have a selection of new and used Nooteboom trailers for sale.