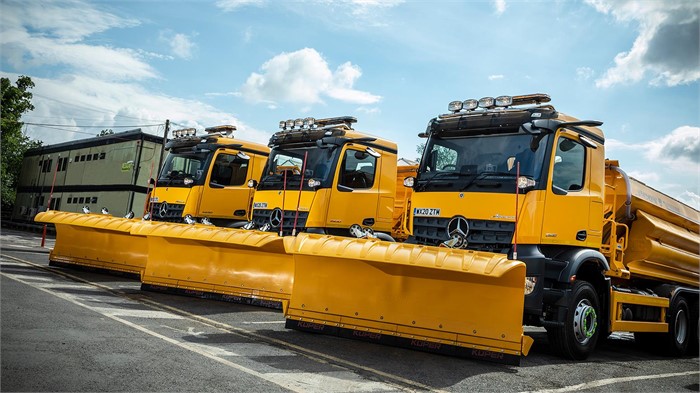 The Econ gritting bodies have 9-cubic-metre hoppers with Spargo in-cab controls and two tanks that hold pre-wet solution for treating roads. There are also on-board weighing systems designed to eliminate the risk of overloading. The trucks have Econ E-Ploughs with ceramic edges that more effectively clear roads before laying down salt, as well as Kelsa light bars and four additional spotlights for enhanced visibility in low-light conditions.

The Arocs gritters receive maintenance at Worcestershire County Council’s depot in Warndon, Worcester, but they will work at one of four depots in the county along with its nearly 40 other gritters, all of which are Mercedes-Benz vehicles. 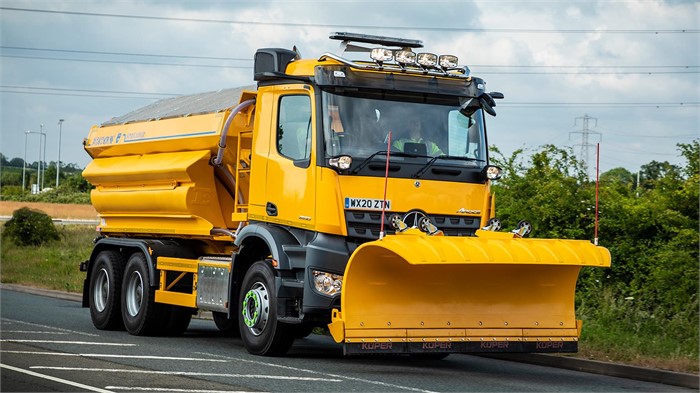 The Worcestershire County Council has worked with Rygor Commercials and its Fleet Sales Manager Jeremy Price since 2004. One reason the county has stuck with Rygor and the Mercedes-Benz brand is that the trucks hold their value well when the company goes to sell them at auction. Another reason, says Council Fleet Manager Tim McNicholas, is that Rygor provides first-class aftersales support.

“Our relationship with Mercedes-Benz goes back many years, so we know its products well, as do our crews. The trucks are very well built and exceptionally reliable, which is particularly important given the job they do,” says McNicholas. “When ice or snow are threatened, we need every piece of equipment to be available to keep the roads open and safe. We keep our gritters for 10 years, and experience has proved that over this life cycle Mercedes-Benz trucks do not let us down.” 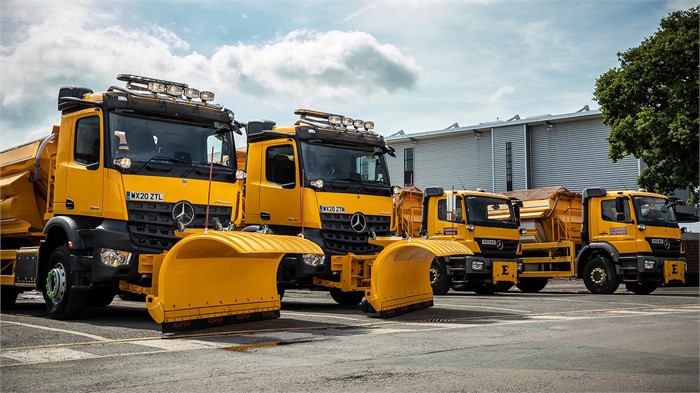 The Worcestershire County Council also ordered three more Arocs gritters that will join the fleet later in the year. (Photo courtesy of Mercedes-Benz.)

The Mercedes-Benz Arocs is available in two variants: the standard Arocs, which supports GCWs (gross combination weights) of between 18 and 48 tonnes and the Arocs SLT, which supports a GCW of up to 250 t. Both models share the same cab specifications, including the ClassicSpace S-cab, ClassicSpace and CompactSpace M-cabs, and ClassicSpace, StreamSpace, and BigSpace L-cabs.

You will find hundreds of new and used Mercedes-Benz trucks and vans for sale on Truck Locator, including Arocs, Actros, Atego, Axor, Econic, and Sprinter models.