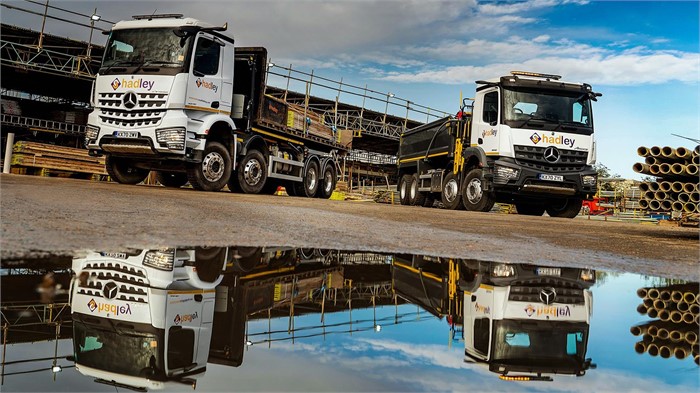 The addition of the two new-generation Arocs means that Hadley Group currently has six Mercedes-Benz trucks in its 13-vehicle fleet. (Photo courtesy of Mercedes-Benz.)

Hadley Group, a scaffolding company based in Rochester that recently decided to expand into waste management, recently added a Mercedes-Benz Arocs tipper-grab truck after purchasing an 8x4 Arocs hook loader truck six weeks prior, both of which are 3240K models. The company has a 13-vehicle mixed fleet and in addition to the two recently added new generation Mercedes-Benz, it operates four other trucks from the marque.

The two new trucks are powered by 10.7-litre, 389-horsepower (290-kilowatt) engines and feature ClassicSpace M Cabs and 12-speed PowerShift 3 automated manual gearboxes. They also feature camera systems that comply with FORS (Fleet Operator Recognition Schemes) along with Mercedes-Benz’s MirrorCam system, which replaces traditional mirrors with roof-mounted cameras and A-pillar-mounted displays on the interior of the cab. 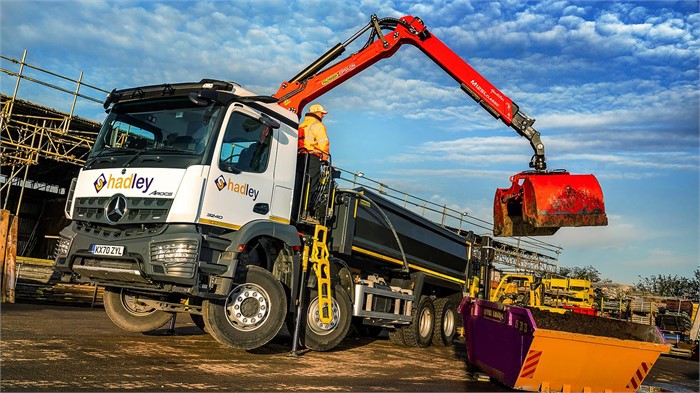 The Arocs hook loader has Hiab Multilift equipment and is used to transport scaffolding supplies, while the grab loader has an Epsilon M125 crane with a clamshell bucket and a Thompson tipper body. The latter was delivered as part of the WorkReady programme, an offering from Mercedes-Benz that “provides operators with access to a range of rigids and tractor units that are readily available off-the-shelf and at very short notice,” the company explains.

“Mercedes-Benz builds a premium-quality product and ours have always lived up to the brand’s reputation for durability, reliability, and competitive running costs,” says Hadley Group MD Carl Byford. “We’ve put two experienced drivers on these new trucks and they’ve adapted to MirrorCam very quickly. Both have told me they prefer the cameras to mirrors, because they can see so much more.” 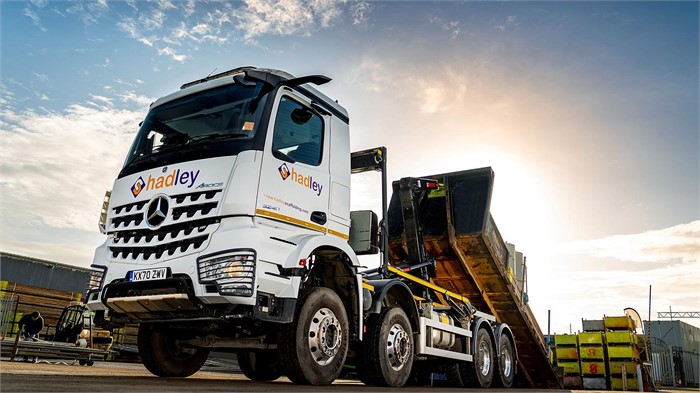 The Mercedes-Benz Arocs is available in two variants: the standard Arocs, which supports gross combination weights (GCWs) of between 18 and 48 tonnes, and the Arocs SLT, which supports a GCW of up to 250 tonnes. Both models share the same cab specifications, including the ClassicSpace S-cab, ClassicSpace and CompactSpace M-cabs, and ClassicSpace, StreamSpace, and BigSpace L-cabs. 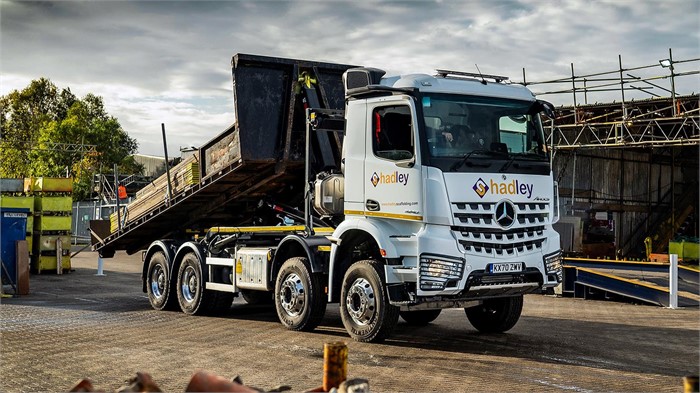 Both of the Arocs trucks also feature Mercedes-Benz’s MirrorCam system that replaces traditional mirrors with roof-mounted cameras and A-pillar-mounted displays inside the cab. (Photo courtesy of Mercedes-Benz.)

You will find hundreds of new and used Mercedes-Benz trucks for sale on Truck Locator, including Actros, Arocs, Atego, Axor, and Econic models.