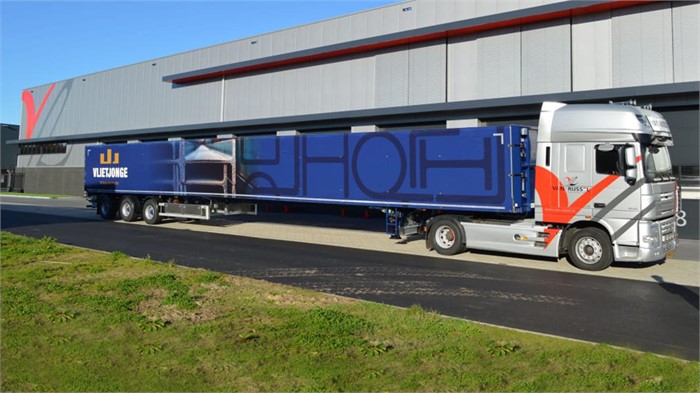 Nooteboom recently unveiled a new version of its Teletrailer extendible floor flatbed trailer that features the Netcap sliding canopy system for protecting loads from the elements. (Photo courtesy of Nooteboom.)

Nooteboom recently introduced a new configuration of its Teletrailer that features a Netcap sliding canopy system. At an event held at Van Rijssel carrosseriebedrijf in the Netherlands, the two companies demonstrated how the unique trailer essentially doubles as an extendable flatbed and a curtainsider, depending on the application, using a sliding double-rail system with a cover and a tarpaulin. The system allows the operator to protect a load of up to 20 metres (66 feet) in length in the event of rain, snow, or other adverse weather conditions. Best of all, the cover can be operated by one person.

All of the trailers in the Nooteboom Teletrailer range are flatbeds designed to carry rotor blades, steel beams, and other particularly long loads. There are options for a fixed trailer or one with a single, double, triple, or quadruple extendible load floor and from two to seven axles. The range-topper can support a payload of up to 120 tonnes (132 U.S. tons). Other features and options include hydraulically steered or self-tracking axles, air or hydropneumatic suspension, and the choice between a true flatbed or a gooseneck.

Nooteboom has a patent for its pre-cambered load floor beams, which ensure that the floor stays flat while its retracted. This distinct feature also improves the strength of the load floor to prevent sagging and makes it much easier to extend or retract the floor.

Find Your Next Nooteboom Trailer

You will find a number of Nooteboom trailers for sale every day on Truck Locator, along with flatbed and extendable trailers from other popular brands.