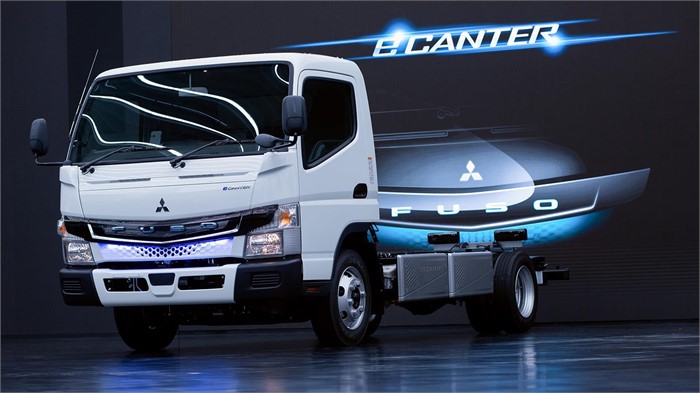 Daimler Trucks recently announced that it has sold more than 200 FUSO eCanter light-duty electric trucks across Europe, Japan, and North America since it launched in 2017. (Image courtesy of Mercedes-Benz.)

Daimler Trucks recently announced that it has sold more than 200 FUSO eCanter trucks around the world. Of the 200, there are more than 100 in Europe, 60 in Japan, and 40 in the United States in operation with customers in Amsterdam, Berlin, Copenhagen, Helsinki, Lisbon, London, New York, Oslo, Paris, and Tokyo, among other cities.

Mercedes-Benz is responsible for the distribution of the FUSO brand in Europe, and several prominent customers across the continent currently have eCanters in their fleets, including Dachser, DB Schenker, Deutsche Post DHL PostNL, Rhenus Group, and others.

The introduction of the eCanter is only the start of FUSO’s sustainability goals. In fact, while all of the eCanters around the globe combined have already covered more than 3 million kilometres (1.86 million miles) for an impressive reduction in emissions, FUSO wants all of its vehicles sold in Europe, Japan, and North America to be CO2-neutral, from tank to wheel, by 2039.

Launched in 2017, the 7.49-tonne (8.3-U.S.-ton), light-duty FUSO eCanter has a chassis payload capacity of 4.15 t (4.6 U.S. t) and an operating range of over 100 km (62 mi). That capacity and range make it well-suited to urban distribution, all while operating quietly and producing zero emissions. Common applications include fulfilling e-commerce orders, delivering packaged goods, and more.

You will find a large selection of new and used trucks from FUSO and Mercedes-Benz for sale every day on Truck Locator.