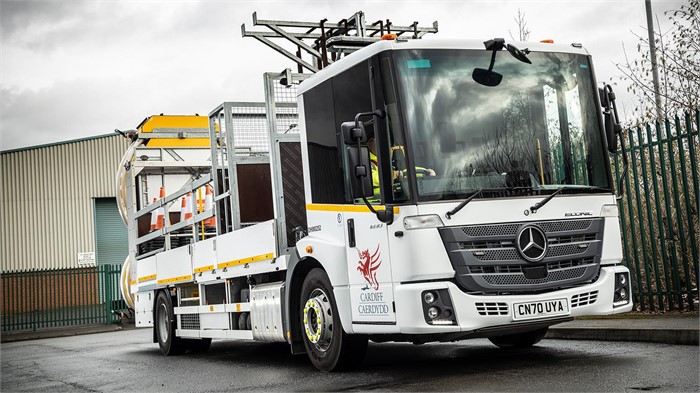 Both of the 18-tonne (19.8-U.S.-ton) trucks are Econic 1830L units with 7.7-litre, 295-horsepower (220-kilowatt) engines and Allison six-speed automatic transmissions. They are designed for low entry and exit so as to ease the burden of to their crews, and they come with a laundry list of safety features that help make them well-suited to urban operations. These include a panoramic windscreen, a glazed folding passenger door, a lower seating position for enhanced visibility, and Active Brake Assist 4 emergency braking with pedestrian detection.

Cardiff Council has operated Mercedes-Benz trucks for some time and currently has several 4x2 and 4x4 gritters and vacuum and jetting trucks in operation. The council also runs 7.5-t (8.3-U.S.-t) FUSO Canters, which are sold by Mercedes-Benz in the United Kingdom. The Canters are spec’d as refuse trucks, tippers, and traffic management vehicles, similar to the new Econics. 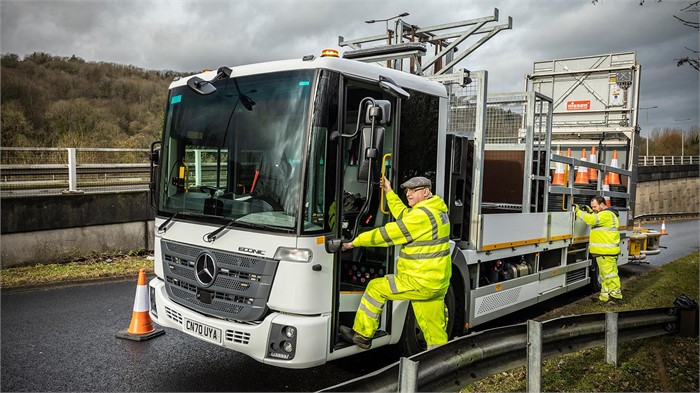 The Right Truck For The Job

“We went out to tender for a low-entry vehicle that could be used for a broad range of road traffic management operations, including lane closures, barrier work, and general repairs,” says Richard Jones, procurement and contracts manager – core fleet for the Cardiff Council. “In terms of its specification and cost-effectiveness the Econic was clearly the best solution.

“With its investment in these highly specified vehicles, the Council has resolved the operational issues its Highways team was facing,” Jones continues. “Like all Mercedes-Benz trucks, the Econic is extremely well-built, while the ergonomics are first-class—not only does it offer excellent visibility, but it’s also easy for crews to step in and out of the cab, something they’ll typically do numerous times during a shift.”

Find Your Next Mercedes-Benz Vehicle

You will find hundreds of new and used Mercedes-Benz trucks for sale on Truck Locator, including a large selection of Actros, Arocs, Axor, Atego, and Econic models.