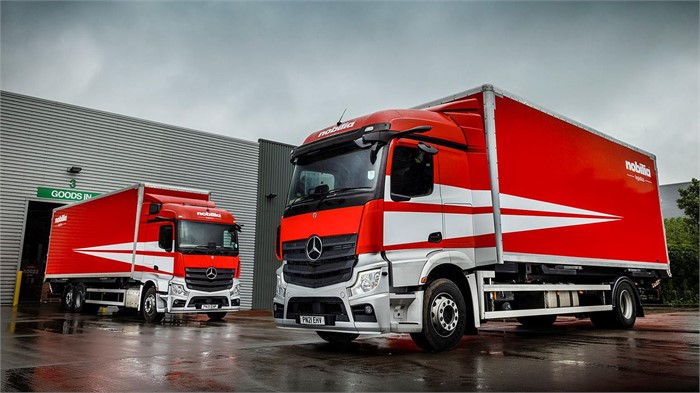 Nobilia Projects, the UK contract kitchen division of German kitchen design and engineering firm Nobilia, recently replaced an ageing, mixed-marque fleet of eight trucks with seven new Mercedes-Benz Actros rigids designed to work with 14 demountable box bodies. The trucks in the old fleet were fitted with conventional fixed bodies, but the move to Actros trucks and two sets of demountable bodies gives Nobilia Projects the flexibility to load the next wave of installations while its trucks are still on the road. Upon their return, all that’s needed is to back under the fully loaded boxes, fix them in place, and head back out.

The new fleet includes four 26-tonne (28.7-U.S.-ton) and three 18-t (19.8-U.S.-t) Actros rigids. The six-wheel 2530 Actros variants feature 7.7-litre engines rated for 300 horsepower (220 kilowatts), and the four-wheel 18-t models employ 238-HP (175-kW) engines. Nobilia Projects reports that the additional power and capacity of the 26-tonners allow them to carry 18 stillages of product, or six more than the 18-t trucks. All of the new trucks feature Mercedes’ StreamSpace cabs, which helps make them considerably more aerodynamic and fuel-efficient than the outgoing trucks.

Nobilia Projects Transport Manager Darren Steeles is also a driver and believes the cutting-edge technology of the new Actros offer major benefits for safety and productivity. 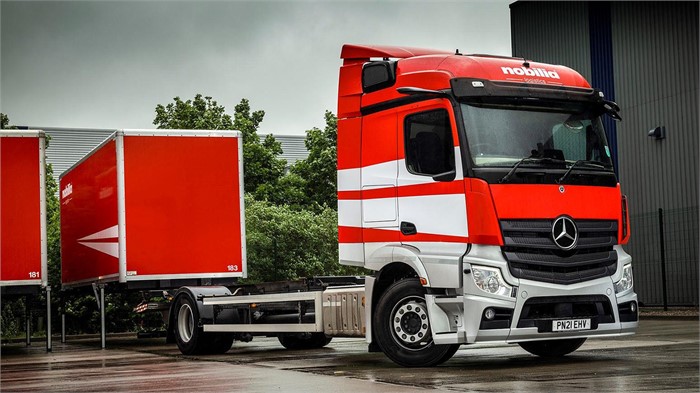 “MirrorCam is brilliant, a massive step forward in terms of safety,” he says. “All-round visibility is so much better. With conventional mirrors you know roughly where your wheels are but you can’t actually see them. MirrorCam allows you to see the edge of your wheel so you don’t hit anything, which saves on tyre damage as well.”

The trucks are also equipped with the Active Brake Assist 5 emergency braking system, which includes pedestrian recognition to increase safety in urban environments. Features like Proximity Control Assist and Predictive Powertrain Control have proven to be valuable as well. “The adaptive cruise control is like nothing we’ve had before and takes a lot of pressure off the driver,” Steeles says.

Truck Locator lists a variety of new and used Mercedes-Benz trucks, including hundreds of Actros tractor units and rigids for sale.