Volvo Bumps Up the FH

Volvo Trucks has announced that it is to strengthen its FH offering by launching a new version with a beefier bumper. 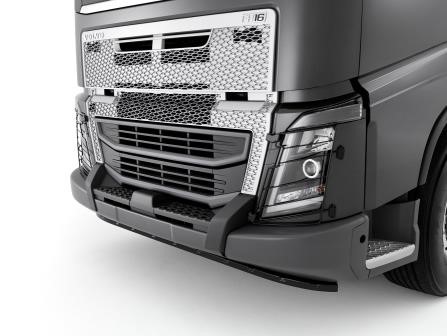 The Volvo FH can now come with a heavy duty bumper
The ruggedized front end will now make the Volvo FH more suitable for rough site roads and will extend the truck's capabilities in the key timber transportation and construction sectors.

Volvo says that it will be showing off the new heavy-duty version of the FH at the Intermat show held in Paris from April 20th to 25th.

According to Ricard Fritz, Vice President in charge of the Volvo Trucks brand, the heavy-bumper version of the Volvo FH will further enhance the utility of the Swedish firm's flagship lorry, adding more protection to its already impressive characteristics of cab comfort, power and driving dynamics.

This will make the Volvo FH tough enough to excel in environments where an unprotected truck would be prone to underside and frontal damage.

The new bumper for the FH has been built on the same design principles as the tough Volvo FMX, which itself was designed for working on challenging construction sites.

It has a skid plate and corners made out of 3mm steel, and there is also a useful footstep fixed into the bumper above the skid plate.

The heightened position of the new bumper adds to the already excellent approach angle. This is the angle of slope that the truck could theoretically approach without grounding the chassis or bodywork.

At more than 20 degrees on the FH trucks with special construction chassis, this is enough to cope with almost any terrain the truck is likely to encounter. The bumper can also be fitted with a heavy-duty towing eye, constructed from cast iron and capable of towing loads up to 36 tonnes.

Volvo is very aware of the premium market positioning of the Volvo FH, and the company wanted to be sure that the new rugged design did not dilute that image.

The designers responded by creating a wedge shape of steel in the corners that flows out smoothly towards the centre of the bumper. This is successful in creating a discreet but sturdy profile that in no way detracts from the upmarket image of the Volvo FH. 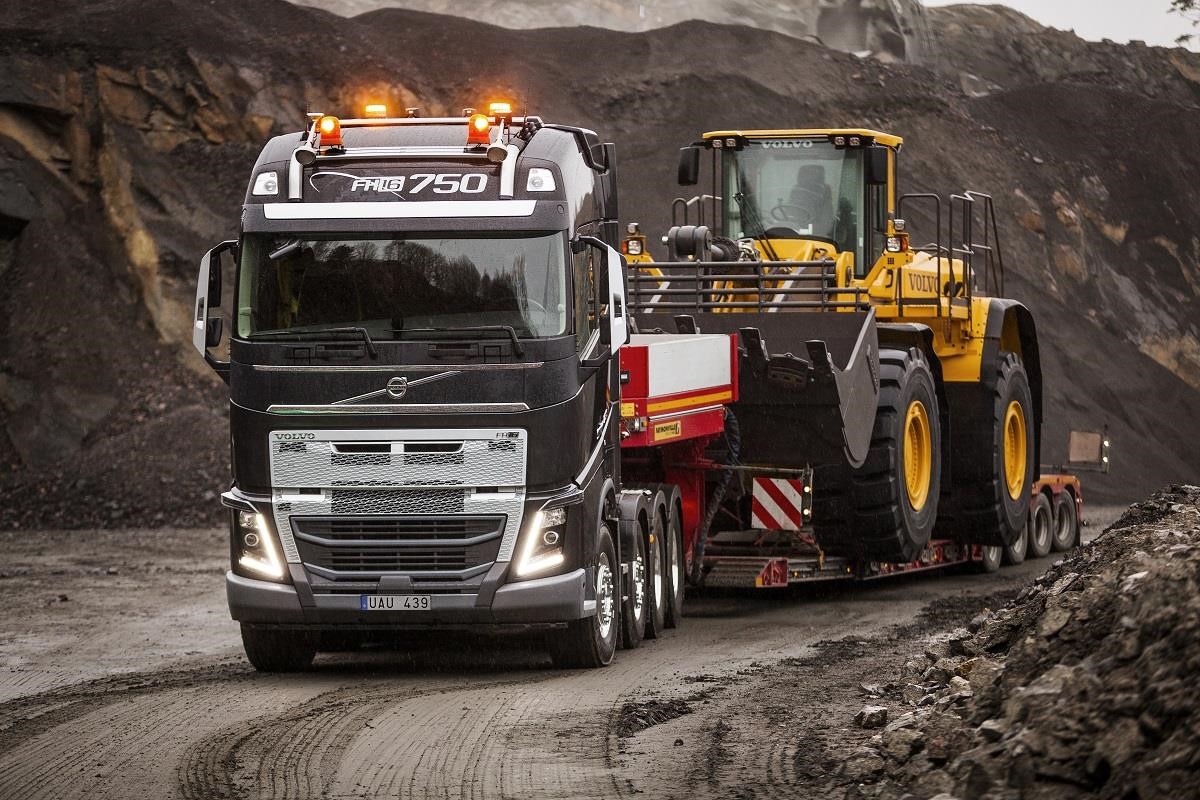 
Protection in the roughest environments

The new and more robust bumper has been set forward by a shade over 13cm in order to allow it to provide the truck with even more protection in the roughest of environments, therefore offering greater protection to vulnerable components such as the light clusters.

This makes the Volvo FH an even more appealing option for those operators who need a robust truck to work in construction and forestry operations with the need for off-road work and even international long-haul routes where road conditions may be a little harsher than we are used to here in the UK.

The new tough bumper for the Volvo FH may be a small change, but it again demonstrates Volvo's determination to ensure that its flagship truck remains ahead of the competition.

The evolution of truck technology continues apace in all areas, but while engines and electronic systems may get the most attention, the latest advance from Volvo comes in an often overlooked area. This is because the Swedish firm is bringing a special heavy-duty bumper to market, ensuring that the chassis on which it is deployed will be better positioned to withstand wear and tear in particularly taxing circumstances.

Volvo's own FH and FH16 trucks will be eligible to have this new component installed, with the idea being that it will not only be more durable than a standard bumper but will also be safer, particularly when carrying out tasks such as transporting timber or carrying loads around construction sites.

The rough and tough nature of the bumper is assured thanks to the use of 3mm steel for the corners of the skid plate. Buyers will have the option of specifying the bumper with an integrated towing eye, which will be a useful addition and is rated to bear a maximum of up to 36 tonnes, although this is not a standard inclusion.

Travelling across uneven terrain or in the confines of sites where debris and obstacles may be commonly encountered can leave trucks with crucial components that easily become damaged. But the design of the Volvo bumper is such that things like the headlamps are afforded additional protection, thanks largely to the fact that it is mounted a full 132mm further forward than standard bumpers.

Volvo spokesperson John Comer told Trucking Mag that the heavy-duty bumper introduced for the new specialist chassis that the company has released in the last 24 months is ideal for use in various daunting environments, whether by forestry organisations or construction firms that want trucks which can go off the beaten track without succumbing to physical damage too easily.

Ideally, this bumper will be combined with construction-specific chassis which offer increased clearance to optimise their performance on sites where tarmac surfaces may not be universally available. And the introduction of a product such as this is an apt reminder of how important it is to purchase the correct type of truck for the job at hand, whether you are investing in a new vehicle or procuring a second-hand unit to squeeze the most mileage out of your budget.

Volvo is not only responsible for the production of quality trucks that can handle haulage duties of all kinds, but also adapted models which are more specific in their attributes. This includes skiploaders and other heavy-duty models, along with tankers, refrigerator box trucks and even gulley suckers.

Developments that enhance new models are worth examining, because of course in a relatively short period of time they will filter through to the second-hand truck market, where buyers can benefit from them without the same level of cost to bear. And with Volvo's influential role in the market, it will not be long before its rivals introduce their own heavy-duty bumper technology.
Category: Truck and Trailer News
Tags : volvo trucks
Tags
volvo trucks
Blog Archive
East Midlands’ JC Balls & Sons Specifies MirrorCam Feature In Its New Mercedes-Benz Arocs Truck
MirrorCam eliminates a truck’s side mirrors and replaces them with a system of cameras, which feed live video to 15-inch displays mounted in the cab on the two A-pillars. ...
Read More
Maritime Transport Wraps Up Acquisition Of 100 New Mercedes-Benz Actros Trucks
The firm’s recent order represents its first new trucks to bear the three-pointed star since 2017. ...
Read More
MAN Truck & Bus At Work On The ANITA Project’s Self-Driving Vehicles For Hub-To-Hub Logistics Routes
After the development and implementation phase, the software and an autonomous MAN truck—with a safety driver on board—will begin testing in real-world operations in Ulm. ...
Read More
Scania Partnering To Test Feasibility Of Long-Haul Electrified Trucks Powered By Overhead Wires
The electric road system is seen as one of the most technically viable and economically attractive options for the electrification of heavy-duty trucks because it uses known and available technologies in new ways. ...
Read More
Waste Management Specialist Receives Two High-Spec Mercedes-Benz Trucks
Select Environmental Services has purchased trucks from other manufacturers in the past, but chose dealer City West Commercials because they “tick every box” on every order, the firm says. ...
Read More
Isuzu 3.5-Tonne Grafter Wins 9th Consecutive Best Builders’ Truck Award
Trade Van Driver’s annual awards are judged by the magazine’s expert panel of journalists and readers who use light commercial vehicles. ...
Read More
Low Cab Entry Drives Highway Maintenance Specialist’s Acquisition Of Volvo FE Tippers
Ringway of West Sussex has added three 26-tonne Volvo FE 6x2 rigid tipper trucks to its UK-wide fleet. ...
Read More
IVECO Launches Projects To Promote The Benefits Of Natural Gas & Its Key Role In Decarbonizing Transport
?The “IVECO Ambassador” programme aims to raise awareness of the brand’s values on different themes. ...
Read More
IVECO’s Brescia, Italy, Production Plant Manufactures 600,000th Eurocargo
The milestone-setting Eurocargo is powered by compressed natural gas (CNG), which Plant Director Marco Colonna says reaffirms IVECO’s commitment to sustainable transportation. ...
Read More
PRM Green Technologies Sticks With Mercedes-Benz Actros For Equipment Recycling Transport
The firm has acquired a second Mercedes-Benz Actros 2540 LnR, this one a member of the fifth-generation Actros range introduced to the UK in 2019. ...
Read More