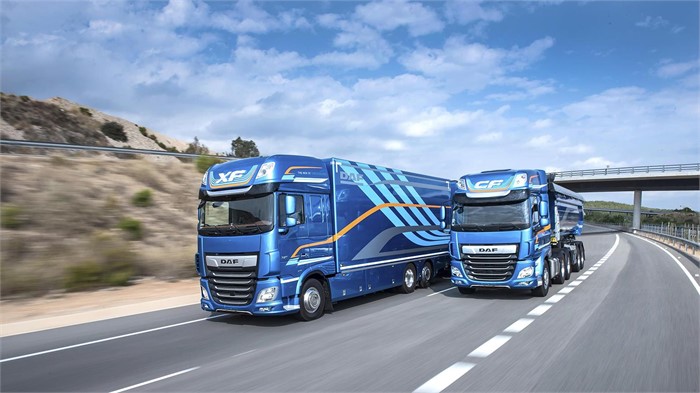 DAF’s CF and XF series trucks have earned quite an impressive list of accolades since they were introduced. (Photo courtesy of DAF.)

DAF is going to need a bigger trophy case. This latest award comes less than a year after DAF took home the International Truck Of The Year prize, as determined by an independent jury of road-transport journalists from nearly two-dozen European countries. According to the Slovenian awards panel, “The DAF CF and XF . . . [are] designed with a clear focus on both maximum profitability for the owner and highest comfort for the driver. The combination of the completely new PACCAR MX-engines with the TraXon gearbox and DAF’s own rear axles, results in excellent fuel efficiency and great driving characteristics.”

All The Bells & Whistles

In addition to the new powertrains and highly efficient transmissions and rear axles, the CF and XF sport a new after-treatment system that results in 7% less CO2 emissions, as well as sophisticated software and aerodynamic features that make a measurable difference in fuel consumption. Depending on the configuration of the trucks, these commercial vehicles can also be up to 300 kilograms lighter than the previous models, which further increases fuel efficiency and helps increase the trucks’ payload capacity.

Driver safety and comfort features include adaptive cruise control capable of automatically changing speeds to maintain a safe following distance behind other vehicles, a lane departure warning system, Vehicle Stability Control to prevent jackknifing, and an optional Silent version, which relies on engine software and an encapsulated gearbox to keep the trucks quieter than ever.

If you’re in the market for new or nearly new DAF trucks , you’ll find a wide selection available for sale on TruckLocator.co.uk.