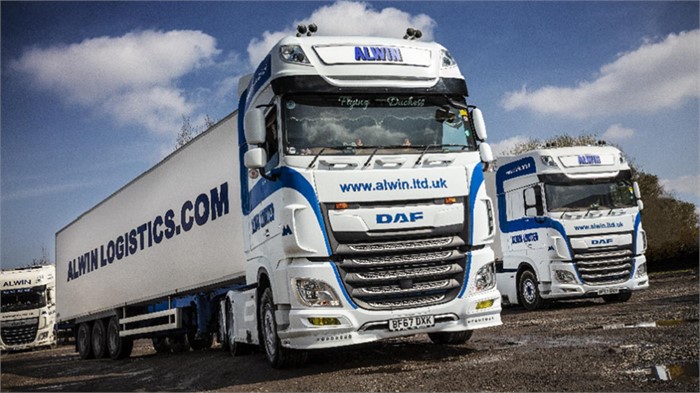 Alwin Limited, which has been in business for 50 years and maintains operations in the waste management and temperature-controlled distribution industries, wants to make a statement with its two New DAF XF 530 trucks. The trucks feature spoilers and side skirts, double-mounted trailing axles, air suspensions, Traxon automated boxes, and cabs that sport leather trim and microwaves.

“We are not ones to hide in the background,” said David Rowlingson, joint-managing director of Alwin Limited, in a press release. “We are a successful operation and we want our customers, and their customers, to see us around their premises and know they are dealing with a business that does things properly. Nobody ever got well-known by not being noticed!”

Alwin Limited was originally attracted to the New XF thanks to DAF’s claim that operators could as see as much as 7% in fuel savings. The company, already having a few XFs in operation, decided it was worth a short, and the results have been better than expected. “We were delighted with our XF additions last year, but these New XFs are already better on fuel, and in our new long-distance operations that makes a huge difference for us,” said Rowlingson. “We’re already recording 7.2 percent improvements, and as they bed in it should only get better.”

Alwin Limited found quite a bit of demand with potential customers throughout Europe for temperature-controlled hauling, and so the company decided to invest in that potential. The company’s fleet, which is now up to 26 total thanks to the two new XF tractors, has already added 12 new refrigerated trailers over the past year. Alwin Limited plans to continue its successful streak and possibly expand further with new trucks and trailers in the near future.

If you have plans to expand your fleet, take a look at the thousands of trucks for sale at TruckLocator, including hundreds of DAF models. You’ll find listings for trucks in the DAF XF range, including used DAF XF 530 trucks.