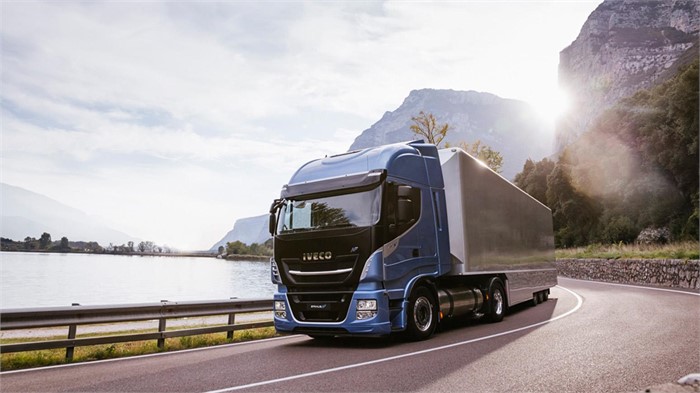 The Stralis NP 460 has a range of up to 1,600 kilometres and uses about 15% less fuel than a traditional diesel truck. (Photo courtesy of IVECO.)

IVECO recently announced that its Stralis NP 460 and Stralis XP 480 fared well in a series of independent fuel efficiency tests overseen by a group of European publications. The Stralis NP powered by liquefied natural gas (LNG) came out on top overall and the diesel-powered Stralis XP came in third in fuel consumption when compared to diesel trucks from other manufacturers.

“Our Stralis NP 460 achieved breakthrough results in recent tests conducted by leading European publications in real driving conditions,” says Pierre Lahutte, IVECO brand president. “It tops the ranking with a significant margin over all traditional diesel trucks. The tests confirmed the resulting savings for the owner compared to the diesel equivalent, with no compromise on performance and better comfort due to the quiet operation and lower vibrations. In a year, a Stralis NP 460 clocking up 150,000 km can deliver savings in excess of 10,000 euro on the owner’s TCO compared to an equivalent truck running on diesel and urea.”

IVECO’s goal with the Stralis NP has been to match the performance of diesel trucks while offering a more sustainable fuel alternative. The single-fuel configuration of the Stralis NP 460 sports two LNG fuel tanks, has a range of up to 1,600 kilometres, and uses as much as 15% less fuel. This, when combined with a 90,000-kilometre service interval, can lead to a nine percent lower total cost of ownership than what you’d find with a traditional diesel model.

There are currently more than 3,000 Stralis NP models in operation among more than 400 logistics companies. To help with that growth, there is an expanding natural gas distribution network that currently has around 150 refueling stations, but that figure should exceed 300 by the end of this year.

If you want to improve the fuel efficiency of your fleet, TruckLocator has hundreds of new and nearly new IVECO trucks for sale, including a big selection of Stralis models.