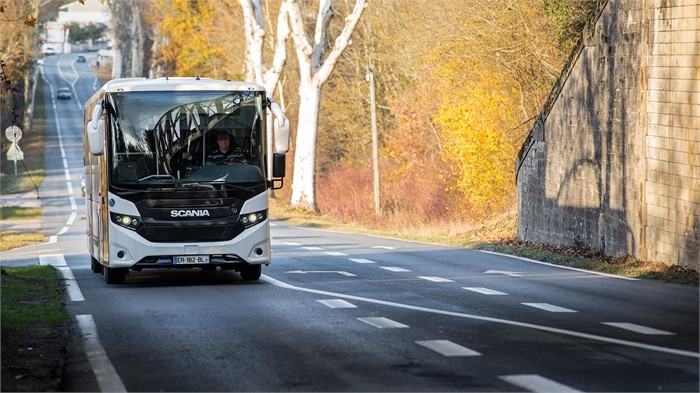 Citram Aquitaine, a transport company based in Bassens, Gironde, in France that’s been in the business since 1921, is using leftover waste from the wine-making process called grape marc to make ED95 fuel that powers a Scania Interlink LD Euro 6 bus. Raisinor France Alcools collects 100,000 tonnes of grape marc annually from wine cooperatives in Bordeaux and generates the biofuel needed for the experiment. The Scania bus travels on a route between Bordeaux and Blaye in France.

“We have to be at the forefront of innovation,” says Nicolas Raud, director of Citram Aquitaine. “I believe that the ability of a carrier to reconsider its energy mix is essential. We were immediately drawn to Raisinor and Scania’s proposal of locally produced, environmentally friendly power, so we asked to be involved in the experiment to measure the efficiency and viability of this solution.” 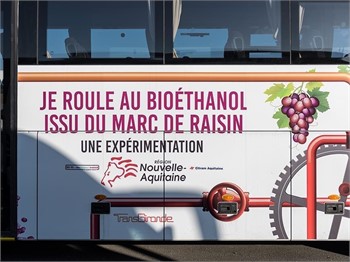 French text on the side of the bus roughly translates to “I run on bioethanol produced from grape marc.” (Photo courtesy of Scania.)
Price Of Ambition

Jérôme Budua, director of Raisinor France Alcools, suggests that the amount of biofuel it makes from grape marc would be enough to “supply 1,000 vehicles locally,” and that focus on regional solutions for alternative fuel is at the heart of this project. The main reason for that is because ethanol outputs half the energy of an equal amount of diesel, which in turn makes it more expensive to use as a fuel source. For companies like Citram Aquitaine, the higher price is justifiable if it means cutting down on pollution.

“Reappraising our fleet of vehicles by investing in alternative energy can only be done with the support of the region, and we know that the region views this approach favourably,” says Raud. “Bioethanol and gas allow us to develop an energy mix that is suitable for our area. In our network, some remote places do not have and probably will never have a petrol station with gas. They could easily accommodate this locally produced, ecologically relevant energy.”

Scania and Raisinor have a relationship that dates back to the 1990s, which is the year Scania began operating biofuel-powered buses in Sweden and also the year Raisinor started supplying bioethanol for use in those buses. That relationship grew when Europe made a push toward using alternative fuels, like E85 and SP95-E10, in 2009. The partnership between those two companies and Citram Aquitaine is a natural next step in the process.

“The bioethanol and diesel comparison is irrefutable, with 85% fewer carbon emissions, 50% less nitrogen oxides, and 70% fewer particulates,” Budua says. “We are now talking of a second-generation bioethanol, which stands out from the first-generation alcohol produced from beetroot and cereals.”In case you’re in the market for vehicles, this site offers a range of used buses for sale as well as hundreds of quality used Scania trucks.