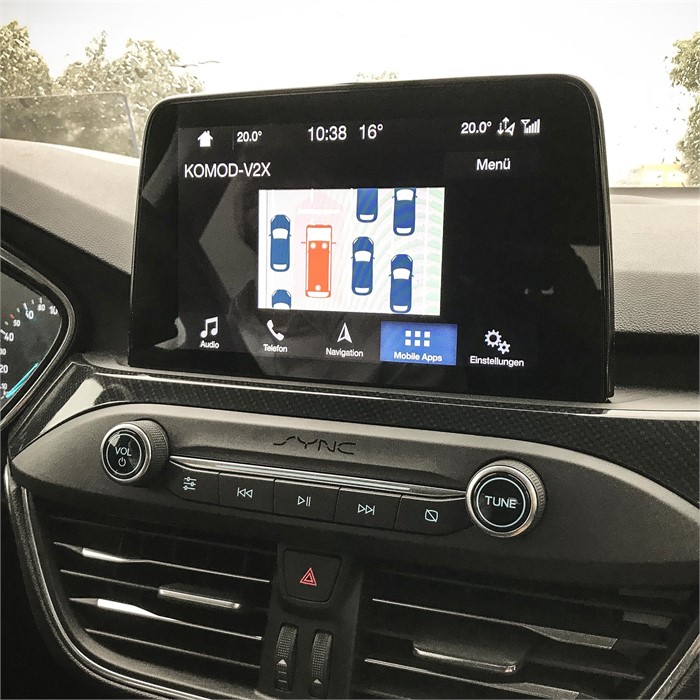 Ford is testing a new connected vehicle platform in conjunction with Vodafone to give drivers more information about traffic accidents, emergency vehicle response, and more. (Photo courtesy of Ford.)

Ford is working with Vodafone to test a new connected vehicle platform that would warn drivers of an accident up ahead and tell them which side of the road to be on to allow emergency vehicles to make their way to the scene as quickly as possible. This system is one aspect of the Kooperative Mobilität im digitalen Testfeld Düsseldorf (KoMoD) program, which has €15 million in funding dedicated to connected car projects and autonomous driving technologies.

“Connected and automated driving are key technologies of the future,” says Gunnar Herrmann, CEO of Ford of Germany. “Ford has a long history of developing and testing vehicle to traffic infrastructure and vehicle-to-vehicle communications that can contribute to greater road safety and efficiency across the world. Together with Vodafone and in cooperation with the other companies involved, we will gain decisive insights on the Düsseldorf testing grounds to further advance the networking of vehicles.”

The new Ford Focus already has an available eCall feature that contacts emergency services either automatically or via the press of an SOS button in the vehicle. The project with Vodafone seeks to create an eCall Plus feature that will add the ability to warn other drivers up to 500 metres away about accidents on the vehicle’s infotainment display. This would include helping drivers create “emergency corridors,” which, for example, “are created in between the two lanes by drivers pulling over to either side” on two-lane roads, according to the press release. This system would remove the guesswork for drivers that know about emergency corridors already and help educate those who do not.

Ford is testing other technologies from the KoMoD project as well, including an Emergency Vehicle Warning system that sends a notification from fire trucks, ambulances, and police cars to drivers in the area so they’ll know where those emergency vehicles are located. Other projects up for testing in the future include a Tunnel Information System to let drivers know about closed lanes or changing speed limits and a Traffic Light Assistance System to inform drivers about traffic light patterns.

You’ll find a big selection of used Ford trucks, vans, and cars for sale every day at TruckLocator.