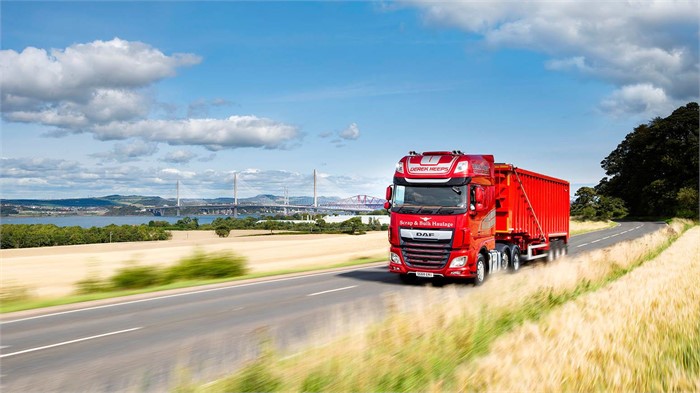 The DAF XF 530 FTG 6x2 tractor unit features a PACCAR MX-13 engine that produces 530 horsepower and up to 2,600 newton-meters of torque. (Photo courtesy of DAF.)

Bo’ness, Scotland, haulier Derek Heeps Ltd. recently purchased a new 90th Anniversary DAF XF 530 FTG. The 6x2 tractor unit is powered by a PACCAR MX-13 engine that produces 530 horsepower and a maximum torque of 2,600 newton-metres. It also features a Super Space Cab and comes standard with a 12-speed TraXon automated transmission (DAF also offers an optional 16-speed automated TraXon gearbox for the truck). The new XF will join the company’s fleet of more than 30 vehicles, over three-quarters of which are DAF models.

“We have a very good reputation in our business—if we say we are going to do something, then people know it will be done, and done properly,” says owner Derek Heeps. “I am very happy to be adding this 90th Anniversary XF to the fleet. It’s a great-looking truck and it’s a statement of our confidence in the operation we run. Scrap and glass waste, which accounts for a great deal of our haulage work, is a tough area to work in. The DAFs generally offer our drivers a good working environment, which is very important to us if we are sending them away all week, which often we have to do.”

Imperial Commercials, which has more than 30 dealerships throughout the United Kingdom, provided the DAF XF 530 FTG and has built a strong relationship with Derek Heeps Ltd. The company also offers ongoing service for the haulier’s fleet of DAF trucks and the new models operate under DAF MultiSupport R&M programmes that last between three and four years.

“Derek is very kind, in that he says, after the quality of the trucks themselves, we are the next most important factor in his choice of the DAF brand,” says Paul Ritchie of Imperial Commercials. “The fleet has a tremendous reputation for reliability, and that puts us under a lot of pressure to make sure we service, maintain, and prepare them to the highest DAF standards for him. The fleet works hard, so we are on hand at all times to plan and carry out any work that is needed.”