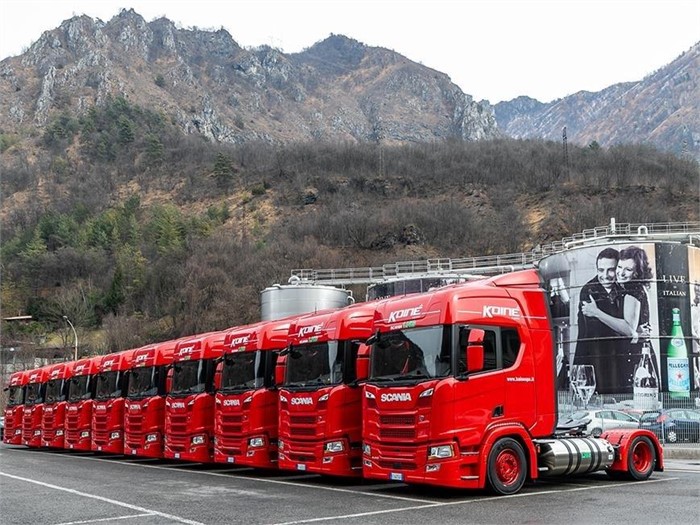 Gruppo Sanpellegrino, a Nestlé subsidiary, and its logistics partner, Koiné, recently purchased 50 new Scania R410 trucks powered by liquefied natural gas (LNG) engines. Adding these vehicles to the fleet will not only support the future growth of the company, which produced 1.5 billion bottles of mineral water in 2018 alone and will soon expand its production facilities, but also makes it so that all of its shuttles now run on gas rather than diesel. This also supports Sanpellegrino’s many sustainability initiatives, like running the business with renewable electricity and reducing water consumption by 200,000 cubic metres.

Sanpellegrino’s tranport operations run like clockwork with 300 truck movements per day. Vehicles travel back and forth between the company’s bottling plant in San Pellegrino Terme, Italy, to a logistics centre in Madone, Italy. Fortunately, the move to liquefied natural gas won’t impact that efficiency because there are already 39 LNG filling stations in Italy with plans to add 25 more in the near future.

The gas engines in these Scania R410 trucks, which produce 410 horsepower and 2,000 newton-metres of torque, reduce carbon emissions by 500 tonnes per year, but also have the added benefit of running quieter than diesel alternatives. The hope is that these benefits, combined with the fact that Sanpellegrino’s trucks typically operate at night, will ease the worries of the local population. “Sanpellegrino is a major employer here and our residents are happy with the fact it is expanding operations and generating more employment,” says Mayor Giuliano Ghisalberi of the Zogno municipality. “At the same time, there has been concern about increased traffic, noise, and pollution. We are therefore extremely pleased with the introduction of gas trucks.”

If you’re in the market for a new or used Scania R410 or other Scania R Series model, you’ll find hundreds of used Scania trucks for sale on this site.