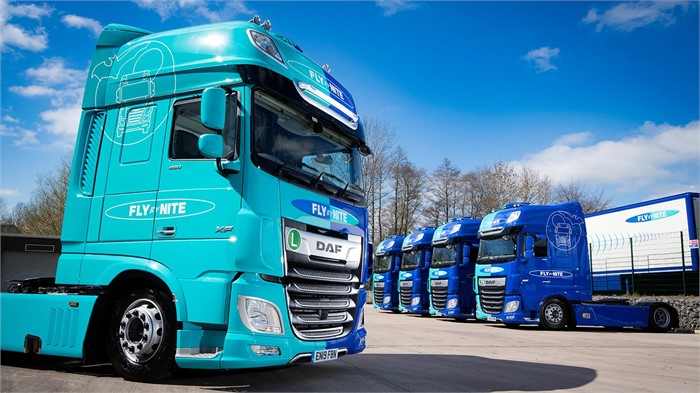 Fly By Nite, a hauling specialist that serves the corporate, entertainment, exhibition, and music industries, recently purchased five DAF XF 480 FT 4x2 low-deck trucks. The company currently has a fleet of 160 trucks, over 75% of which are DAF models, and 150 box and curtain-side trailers. Fly By Nite’s decision to stick with DAF is largely based on reliability. The company handles all of its own repairs and maintenance in-house and typically puts its trucks into operation for up to eight years before selling them. In fact, the company has 2009 plate DAF trucks “still going strong,” according to Fly By Nite Transport Manager Richard Brown.

“This business is all about reliability. We can’t phone up a major star’s production manager and say, ‘We’re terribly sorry, we’re running a day or two late.’ It’s a business where failure simply isn’t an option – so we don’t fail,” says Brown. “It’s why we focus on premium brands of truck, and of those we have opted heavily in favour of DAF. They are just very good products, and, if we should need support, DAF back-up across Europe is great.”

Because Fly By Nite drivers may need to navigate large crowds during entertainment events, the company outfitted its new DAF XF trucks with forward and nearside cameras and audio turning warnings. That is why the company also opts for manual transmissions, citing that “automated boxes could possibly be a hindrance” when maneuvering through festival sites, according to Brown. “We’ve run very successfully like this for years, though we are experimenting with a couple of 530 DAF XFs on hire, and the drivers are very happy with latest TraXon automated box in those, so we might just change our minds going forward,” he adds.

Fly By Nite currently operates a fleet of roughly 160 trucks, more than 75% of which are DAF models. (Photo courtesy of DAF.)

Each of Fly By Nite’s new DAF models features a Super Space Cab that Brown says is “a great favourite with our drivers.” He adds that drivers “can be gone for weeks at a time,” so the company gives “them the best cabs and all the best equipment we can.” On the fleet management side, Fly By Nite uses a telematics package to monitor driver and vehicle performance, including fuel efficiency. DAF says this feature is particularly beneficial for production managers running events, because they can log in to monitor trucks carrying their important equipment.

You will find a large selection of used DAF trucks for sale on TruckLocator, including a number of DAF XF models.