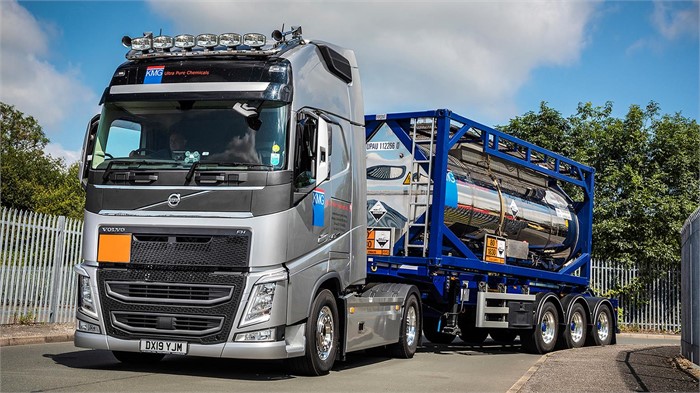 KMG Ultra Pure Chemicals Ltd has had a Volvo FH 540 4x2 tractor unit in operation for three months, and David Roe, the Alfreton firm’s supply chain manager for the UK, says the truck’s “I-Shift Dual Clutch transmission has been a revelation to our European bulk deliveries.” KMG uses tanker trailers to deliver chemicals to customers in the semiconductor industry. These trailers often carry up to 23,000 kilograms (50,706 pounds) of liquid, which tends to slosh around during transport, making it more difficult to drive the truck.

“The seamless gear changes delivered by I-Shift Dual Clutch have done away with a huge percentage of these forces, which results in safer vehicle handling and reduced journey times,” says Roe. “Having no pauses between gear changes also make a huge difference to fuel economy figures, and at present our FH 540 I-Shift Dual Clutch, running at 40 tonnes GVW, is 10% more efficient than any other truck in the fleet.”

The Volvo FH 540 also features a Globetrotter XL Cab with twin bunks, which come in handy on two-man jobs or during new driver training, but it’s the I-Park Cool system that proved most popular with the truck’s operator. “The driver loves the I-Park Cool and has been sending back pictures of him resting under a duvet in the South of France when the outside temperature is 39 degrees centigrade,” says Roe. “Unsurprisingly, our other drivers want the same system.” 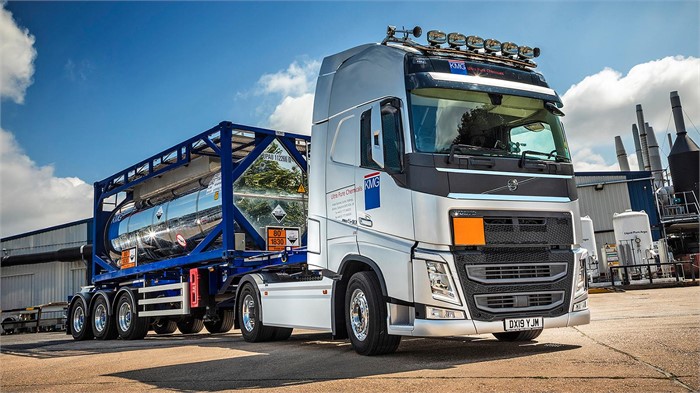 The FH’s I-Shift Dual Clutch transmission has been a game-changer for KMG, offering seamless shifting for better control and improved fuel efficiency. (Photo courtesy of Volvo.)

The FH is the first Volvo truck purchased by KMG, and the company decided to make the order after receiving a demonstrator model from Hartshorne Motor Services, which has a location in Alfreton. That’s also when the I-Shift Dual Clutch made its strong first impression. “On delivery runs to France and Germany, our trucks can average between 650 and 750 kilometres per day,” says Roe. “The speed of gear changes with I-Shift Dual Clutch soon add up, with all those seconds changing into minutes per day. The Volvo can get that little bit further than the others. Sometimes that can mean the difference between catching or missing a ferry.”

You’ll find a large selection of nearly new Volvo trucks for sale every day on TruckLocator, including a number of FH models and several FH 540s.