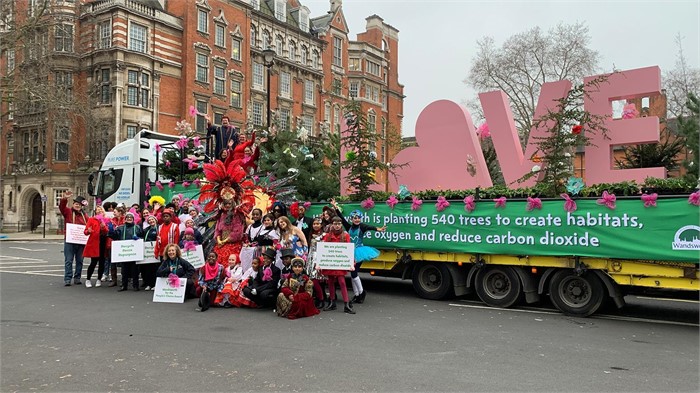 IVECO recently supplied Wandsworth Council with a Stralis NP 460 truck to tow its sustainable float in the London New Year’s Day Parade. The move was made to support the ongoing sustainability efforts of Councillor Jane Cooper, mayor of Wandsworth, who wants to achieve carbon neutrality by 2030. The float featured 540 trees that will soon be planted in the area along with representatives from several schools and charities in Wandsworth wearing recycled clothes and “flower pledges made from recyclables,” according to IVECO.

“We wanted to make every effort to ensure our float was sustainable and only contained materials that had been recycled, reused, or repurposed – from the centrepiece LOVE letters to the banners and the carpeted flooring,” says Cooper. “Being able to power it on 100% natural gas made a massive contribution and provided a really positive start to our work in Wandsworth in 2020 to fight climate change.”

“London's New Year's Day Parade was billed as the 'World's Greatest Street Spectacular' and it didn't disappoint,” says Gareth Lumsdaine, business line director, truck, at IVECO. “We were delighted to be asked to team up with Wandsworth Council – they recognised the Stralis NP as being the most sustainable heavy truck on the road today, and naturally it proved to be the perfect fit with their theme for the event. It was a fantastic way to kick off the new decade, and reinforced IVECO's position in the market as the ultimate partner for sustainable mobility.” 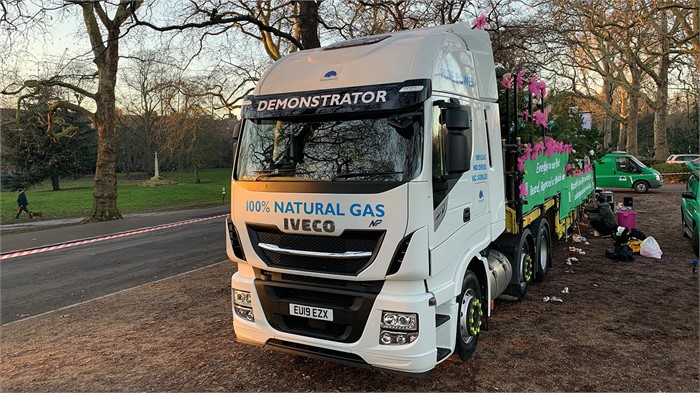 IVECO says that when running on LNG, the Stralis NP 460 reduces NO2 emissions by 90% and particulate matter by 99%. (Photo courtesy of IVECO.)

More On The IVECO Stralis NP 460

The Stralis NP 460 runs on LNG (liquefied natural gas), which powers the vehicle’s 12.9-litre IVECO Cursor 13 NP engine. By running solely on natural gas, the Stralis NP 460 reduces NO2 emissions by 90% and particulate matter by 99%. When used with liquefied biomethane, the vehicle can reduce CO2 emissions by as much as 95%. The engine is also quiet, producing only 71 decibels in the PIEK quiet truck test. The 6x2 Stralis NP 460, which IVECO says is “the most sustainable heavy truck for 44-tonne operation,” also features a 12-speed Hi-Tronix transmission and Hi-Cruise predictive cruise control and gear-shifting technology.

You will find hundreds of new and used IVECO trucks for sale on TruckLocator, including a large selection of Stralis models.