Food and beverage distributor FreshLinc has been so impressed with a Mercedes-Benz 6x2 Actros 2545’s fuel economy and other qualities that it placed an ordered for 14 more just like it. (Photo courtesy of Mercedes-Benz.)

A brightly logoed Mercedes-Benz Actros demonstrator model has been pulling double shifts doing supermarket deliveries for FreshLinc Group. Within a month, the Spalding, Lincolnshire, refrigerated distribution specialist was reportedly so impressed with the truck’s fuel economy and other qualities that it placed an ordered for 14 more just like it.

“We were keen to utilise the new truck’s full potential and very quickly established that its miles-per-gallon returns were in line with our expectations, which sealed the deal,” says FreshLinc Fleet Engineer Andy Marchant.

FreshLinc started to run the 6x2 Actros 2545 demonstrator in April following a six-month trial of another Actros last year. Like the others FreshLinc ordered, which are scheduled to arrive in October, the demo model has a BigSpace cab with a flat floor and a 450-horsepower (335-kilowatt), 12.8-litre, inline six-cylinder engine. Mercedes-Benz presented the truck to the food and beverage distributor via videocall with a question and answer session and vehicle documentation. 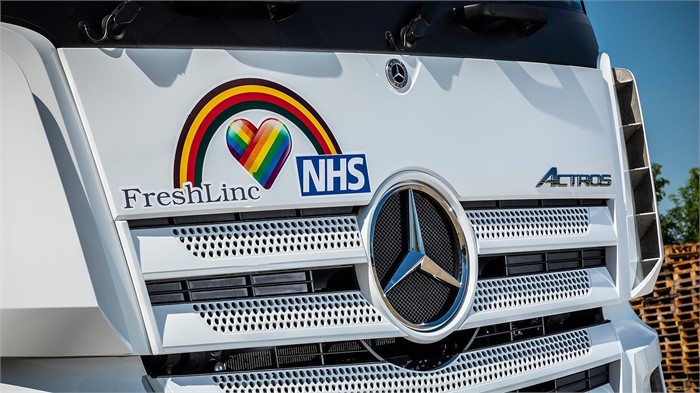 FreshLinc’s demonstrator truck has a BigSpace cab with a flat floor and a 450-horsepower, 12.8-litre, inline six-cylinder engine. (Photo courtesy of Mercedes-Benz.)

The Actros features Mercedes’ MirrorCam instead of conventional mirrors, improving aerodynamics and visibility during cornering and reversing while lowering fuel costs by up to 1.5%. The truck comes standard with Active Brake Assist 5, which uses radar and cameras to fully brake for pedestrians at speeds of up to 50 km/h. An updated Predictive Powertrain Control system provides economy as well as ease of driving, while the upgraded Multimedia Cockpit in the cab features screens of up to 12 inches.

“The Actros has also been well accepted by our drivers,” Marchant says. “They appreciate its general comfort, while the early feedback on features such as MirrorCam and the new dashboard is entirely positive.” 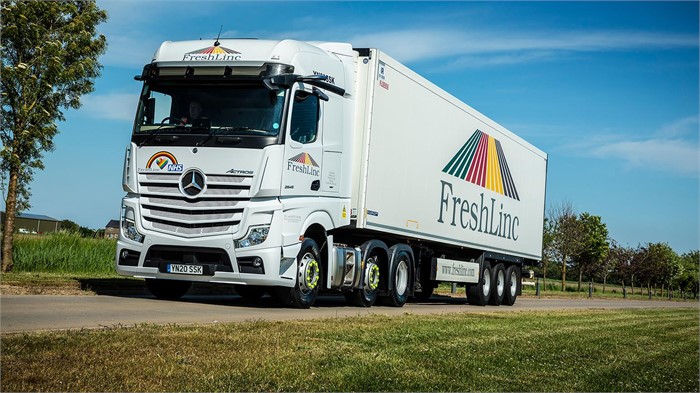 “The Actros has also been well accepted by our drivers,” says FreshLinc Fleet Engineer Andy Marchant. “They appreciate its general comfort, while the early feedback on features such as MirrorCam and the new dashboard is entirely positive.” (Photo courtesy of Mercedes-Benz.)

Find The Right Mercedes-Benz Actros For Your Operation

Feel free to peruse Truck Locator for a variety of new and used Mercedes-Benz trucks available for purchase, including hundreds of Actros models.