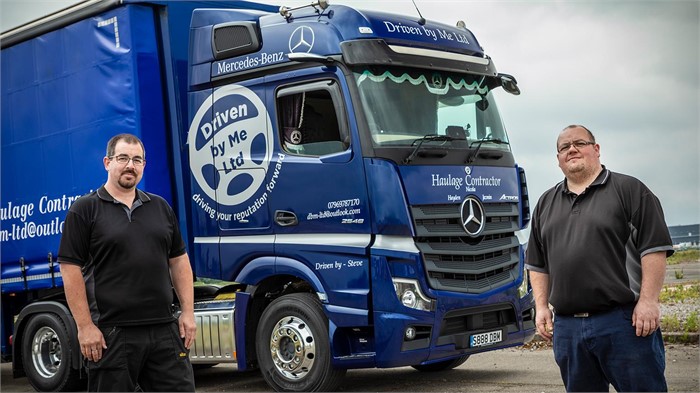 Avonmouth-based haulage contractor Driven by Me recently added a new Mercedes-Benz Actros 2548 tractor unit to its fleet. And although driver Steve Garnier (who has been a professional driver for 12 years) has long preferred Swedish trucks, he says has been beyond impressed by his experience with his new truck. The contract hire tractor unit features a BigSpace cab sporting a Night Blue metallic paint colour with matching bumper along with Alcoa alloy wheels and air horns on the roof. The Actros is powered by a 12.8-litre, 476-horsepower (355-kilowatt) engine. Driven by Me also opted for the Economy package, which adds tyre pressure monitoring and air deflectors.

Because the company expects the truck to cover 140,000 kilometres per year, the new Actros needs to be efficient. Although it’s early days, Driven by Me Director Aaron Vincent says the truck is achieving fuel efficiency of more than 10 miles per gallon (4.25 km/l). Garnier’s new 2548 replaces one of two used Actros models in Driven by Me’s fleet, and Vincent says that fuel figure is ahead of those previous generation trucks by “a good half a mile per gallon.” 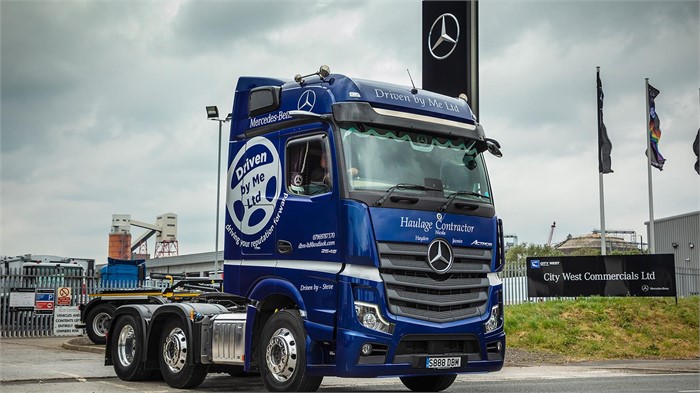 Powered by a 12.8-litre, 476-horsepower engine, Garnier’s Actros takes full advantage of the optional Economy package and so far has achieved fuel efficiency in excess of 10 mpg. (Photo courtesy of Mercedes-Benz.)

Although Vincent admits that Garnier may have had some “reservations” about switching brands and learning how to use new technologies, he was convinced after testing out a demonstrator supplied by City West Commercials. The truck’s Multimedia Cockpit features 12-inch instrument panel with navigation aided by Traffic Sign Assist. It also includes the newest iteration of Mercedes-Benz’s Predictive Powertrain Control.

Driven by Me also opted for the MirrorCam system, which replaces sideview mirrors with cameras and displays. Mercedes-Benz says it provides “much improved rear visibility” while also “eliminating blind spots caused by conventional mirrors.” The system is also compact and much more aerodynamic, resulting in reduced fuel consumption of up to 1.5%. 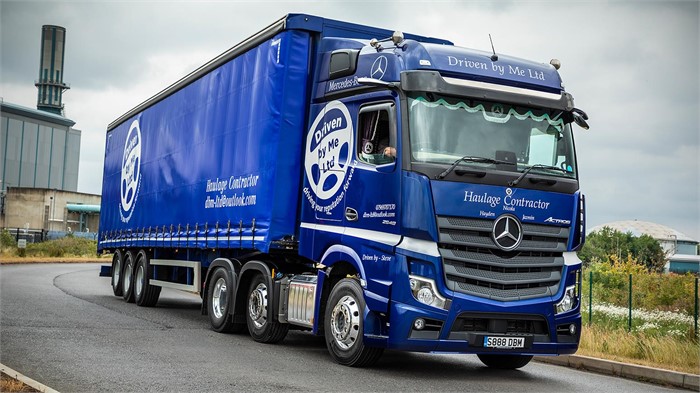 Driven by Me also opted to add the MirrorCam to its Actros, a system that replaces traditional mirrors with cameras and displays to improve visibility and aerodynamics. (Photo courtesy of Mercedes-Benz.)

“A lot of drivers are averse to change but I have no hesitation in describing MirrorCam as brilliant. The cameras make blind side reversing a lot easier, and you don’t have to contend with the huge blind spots behind your mirrors,” says Garnier. “There’s even a security benefit when you’re not driving – if I’m on my bunk at night I can flick a switch by my head which turns the cameras on, so I can see whether anyone’s poking around the trailer. Mercedes-Benz was first with MirrorCam, but I’ve no doubt that within the next few years every manufacturer will be going down the same route.”

The fifth-generation Actros, winner of the International Truck of the Year 2020 award, is built for long-distance haulage and heavy-duty distribution. The 18- to 33-tonne truck is available as a rigid or tractor unit with axle configurations ranging from 4x2 to 6x4. There are 17 cab variants in two widths, with roof shape options such as GigaSpace, BigSpace, StreamSpace, ClassicSpace, and CompactSpace. Euro 6 engine outputs range from 238 to 625 HP (175 to 460 kW) and from 1,000 to 3,000 newton-metres (738 to 2,213 pounds-foot) of max torque. 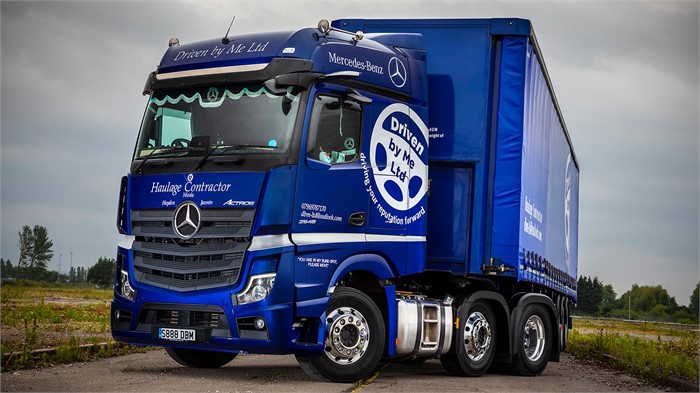 The Actros’ Multimedia Cockpit combines ergonomic and connectivity refinements that allow operators to drive and live in comfort. Standard safety features include a driver side airbag and the Mercedes-Benz Safety Package, which includes Active Brake Assist with Proximity Control Assist and pedestrian recognition technology.

You will find hundreds of new and used Mercedes-Benz trucks for sale on Truck Locator, including a large selection of Actros models.