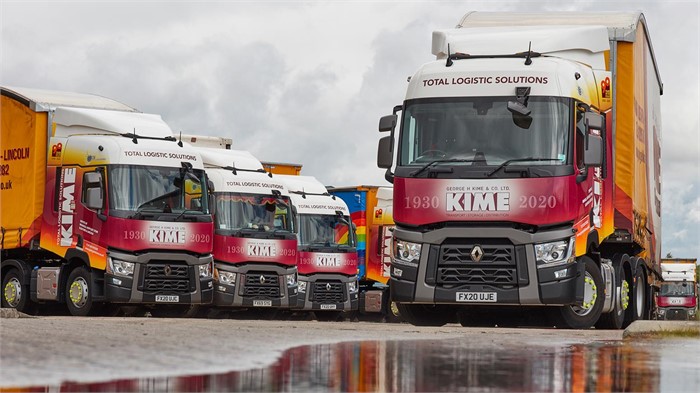 One benefit of the Range T is fuel efficiency, and George H Kime are already seeing an average of more than 11 mpg with the trucks “running over 1,500 miles,” a figure the company has “never come across,” according to MD Nigel Kime. New technologies and features play a considerable role in achieving that number, including a map-based gearshift strategy that analyzes topography, ECO Cruise control with Optiroll, side deflectors and adjustable roof deflectors, and more. Renault adds that tyre pressure monitoring and visible marking for fifth-wheel positioning also help the trucks achieve excellent fuel economy.

Moving Toward An All-Renault Fleet

“The Step D 13-litre engine is incredible; it’s the best fleet vehicle for the application,” Kime says. “Our drivers have been in most manufacturers’ vehicles, but these go above and beyond anything they’ve ever driven. We run a fleet of 44 trucks, 30 tractor units, as well as 18-t, 26-t, and 12-t, and thanks to the extended opening hours and responsive service we receive from Craig Osborne and the team at Thompsons in Boston, we’ll be going 100% Renault Trucks by June 2021.”

There is a large selection of new and used Renault trucks including Range T models for sale on Truck Locator.