New Mercedes-Benz Arocs A Moving Tribute To Grandfathers Who Served 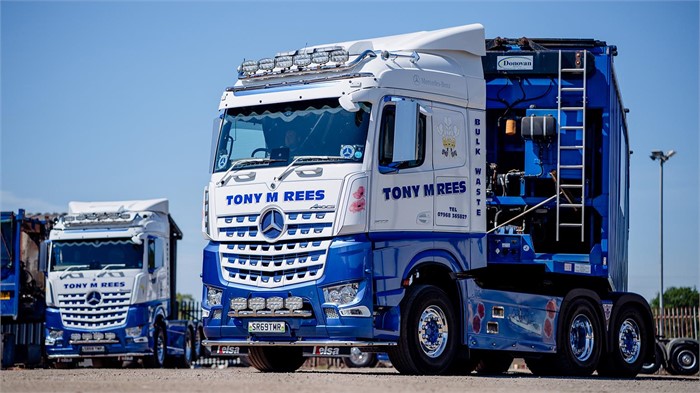 Tony M Rees’ fleet of tractors are usually easy to spot, as the bulk haulier’s vehicles are often decorated with custom airbrushed artwork. On his latest Mercedes-Benz truck, Rees commissioned a personal tribute to mark the 75th anniversary of VE day with images of his grandfather, his wife’s grandfather, and his driver’s grandfather in uniform—each served during World War II in a different branch of the Armed Forces. The truck’s artwork also includes a Spitfire, a naval vessel, and a tank. The new Arocs tractor is the seventh Mercedes-Benz in Rees’ fleet. 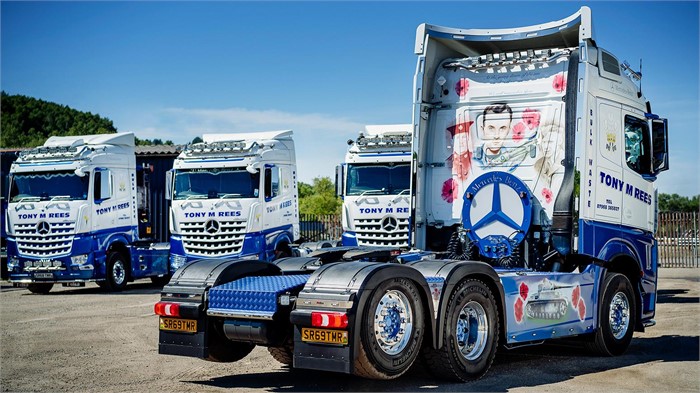 The new truck’s airbrushed livery bears an image of his grandfather, alongside pictures of his wife’s and driver’s grandfathers. (Image courtesy of Mercedes-Benz.)

More On The Mercedes-Benz Arocs

The Mercedes-Benz Arocs is available in two variants: the standard Arocs, which supports GCWs (gross combination weights) of between 18 and 48 tonnes and the Arocs SLT, which supports a GCW of up to 250 tonnes. Both models share the same cab specifications, including the ClassicSpace S-cab, ClassicSpace and CompactSpace M-cabs, and ClassicSpace, StreamSpace, and BigSpace L-cabs. The six-cylinder in-line engine options range from 235 to 617 horsepower (175 to 460 kilowatts), consisting of four displacement classes (7.7, 10,7, 12.8, and 15.6 litres) and 18 output levels. The high-torque design provides anywhere from 1,000 to 3,000 newton metres (737.6 to 2,212.7 pounds-foot) of torque, and the broad range helps to reduce shift operations, which in turn saves wear on the clutch and transmission.

Truck Locator is a good resource for new and used Mercedes-Benz trucks including a wide variety of Arocs models, many of which come fitted with bodies for municipal, loader, concrete, and tipper bodies.