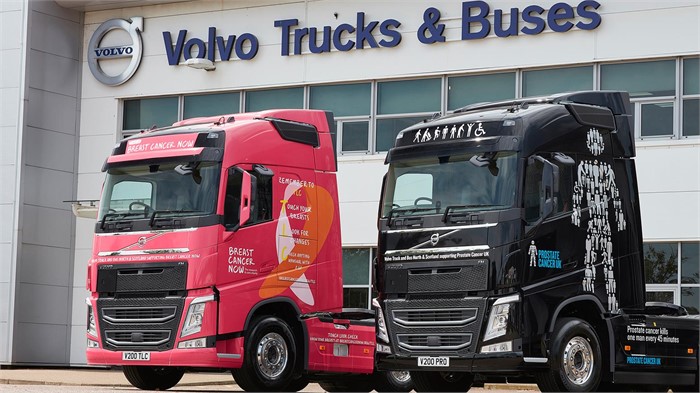 Volvo Truck and Bus Centre North & Scotland now has two special FH demonstrator tractor units available dedicated to raising awareness for breast cancer and prostate cancer. Both vehicles have Globetrotter XL cabs, one sporting a pink Breast Cancer Now livery and the other outfitted with a black Prostate Cancer UK livery, both furnished by Cumbria-based AST Signs. The dealership requests that any customer who test drives one of the demonstrators donate at least £100 per week to that respective charity.

Both FHs are 44-tonners with D13TC Euro 6, Step D engines; one rated at 460 horsepower (343 kilowatts) and the other at 500 hp (373 kW). They also have I-Save technology, which Volvo says enables a “smoother, quieter, and more fuel-efficient journey” by keeping the truck in higher gears so they run at lower rpms.

Bobby Brown, sales director of Volvo Truck and Bus Centre North & Scotland, came up with the idea to add the custom demonstrators, and the dealership has the goal of raising £5,000 each year, but he believes that figure could go as high as £10,000. To start the campaign, the dealer will send one of the trucks to Inverness and the other to Newcastle where they will begin a tour of all 12 of the firm’s depots. Brown says there has already been quite a bit of interest from customers, so he’s hopeful that the trucks will prove to be effective fundraisers.

“Six or seven months ago we decided to put on two new turbo compound demonstrators and we wanted to do something a bit different with them. So, I came up with the idea to have one painted black and one pink to try and raise money for these cancer charities,” says Brown. “But for me, it’s more about the awareness the trucks can raise by running up and down the road. We wanted to have one female charity and one male, and these are both cancers that can be cured if caught early, so we felt they were the ideal choices. If someone who sees the trucks checks themselves when they might not have otherwise and we can save even one life, that would be just fantastic.”

Volvo has set up three websites to support the program: one for those interested in getting more information about the demonstrators, one to donate to Breast Cancer Now, and one to donate to Prostate Cancer UK.

Find Your Next Volvo

There are hundreds of new and used Volvo trucks for sale on Truck Paper, including a large selection of FHs.